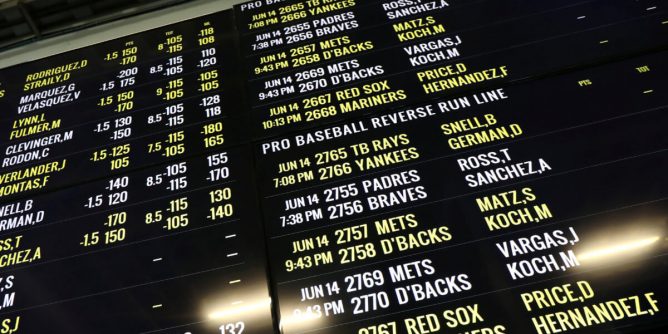 New Jersey has undoubtedly played a huge role in bringing sports betting to the United States and became the biggest wagering market before New York came into the picture. However, the pandemic has resurfaced as the Garden State has struggled to maintain strong monthly handles for months.

Every state that is a part of the industry has witnessed its monthly handles drop due to the summer slowdown. One reason is the MLB is the only league that is in season. Compared to other leagues like the NFL and NBA, the MLB struggles to gain as much interest.

On Tuesday, the New Jersey Division of Gaming Enforcement reported the sportsbook operators combined to register an overall handle of $531.9 million for July, which noted a decline of 16 percent from last month. The handle fell for the third consecutive month. Only in August 2021 did NJ sportsbooks report a year-over-year decline in handle outside of March through June 2020.

July’s decline was expected as the average betting volume usually picks back up in August. However, Covid may have played a role based on the steep decrease.

The decrease in the monthly handles started back in May, but the biggest plunge in the numbers took place in June 2022 as it showed a decline of 17.4 percent when comparing the year-over-year figures.

July’s 2022 handle also witnessed a drop-off of 8.1 percent from July 2021’s total amount of $578.7 million. While industry experts may draw quick conclusions, the Garden State may not need to worry since bookmakers in the Empire State also struggled to bring in bets.

New York registered a handle of $800.8 million for July. The total handle fell below the $1 billion mark for the first time since the operation began on January 8th.

In July, the Revenue Numbers Were Still Higher Than in June

Despite the monthly handle plummeting, revenue numbers in New Jersey matched the national trend. The report noted that the total revenue for July was slated at $45 million, which is 14.8 percent higher than June’s $39.2 million.

Still, the revenue numbers were lower by 18.1 percent when compared to its year-over-year results. New Jersey is certainly looking for a major rebound in August as the NFL season began on August 4th and will run until the 28th.

Operators throughout the industry have shifted their focus to the parlay aspect of things as these types of bets are known to be profitable. Parlay betting has certainly dropped in the summer months, but the numbers should boost up again with the help of the NFL.

Before New York’s mobile sports wagering market launched, monthly handles averaged a boost of 20 percent from people crossing state lines to get involved in the action. Still, the state has put up a good fight for the most part with the Empire State entering the industry.

A bigger question is how the Garden State will cope with New York being a part of a full season of football. It will be interesting to see how the last quarter of the year will play out for New Jersey.