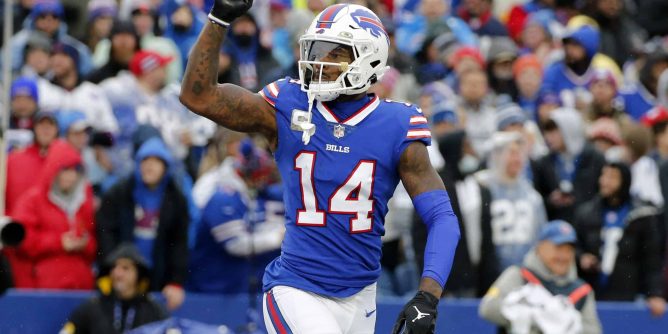 After a long break Buffalo is ready to get back in action in the MNF Titans at Bills matchup. Sean McDermott’s squad made a statement in the opener, beating the defending champion Rams 31-10 last Thursday to easily cover the -1 point spread. Now Buffalo comes back for their home opener as -10 point favorites over Tennessee.

The Titans didn’t have a great start to the season losing 21-20 at home to the Giants as -5.5 favorites. On paper it looks like Tennessee is up against the wall in what should be a Monday Night blowout, and 66% of the betting public is laying the double digit points.

Tennessee Took Their Foot Off the Gas

Buffalo appears to be a great team, but would the Titans be a double digit underdog if they had held on for the win in week one? Tennessee definitely had their chances against the Giants, taking a 13-0 lead into the half and having a chance to win until a 47-yard Randy Bullock field missed left with 0:00 on the clock. New York got the deciding 21-20 win thanks to a 2-point conversion with just 1:08 left in the game.

There are some definitely concerns for Tennessee coming into the MNF Titans at Bills matchup, one of which is RB Derrick Henry having just 82 yards on 21 carries. The Bills held the Rams to 52 yards on the ground in week one, although L.A. ran the ball just 18 times.

Ryan Tannehill played OK in the opener going 20/33 for 266 yards with 2 TDs, not bad numbers considering he’s working in some new receivers after the A.J. Brown trade in the offseason. 1st round rookie Treylon Burks had 3 catches for 55 yards while 5th round pick Kyle Phillips led the way with 6 catches for 66 yards. Buffalo did allow 13 receptions to Cooper Kupp in the opener.

The Bills looked like Super Bowl favorites in week one, and they’ve had the extra rest to prepare for week two after playing in the Thursday night game. Josh Allen connected on 26/31 passes against the Rams with 3 TDs, but he also threw 2 INTs.

Buffalo also ran the ball for 120+ yards in week one, with Allen leading the way with 58 of those on 10 attempts. That could be the area to exploit against a Tennessee defense that was ripped through for 238 yards on 32 carries last week against the Giants. Saquon Barkley broke off a 68 yarder as part of his 164 yards on just 18 carries against the Titans.

It’s going to be a crazy atmosphere in Orchard Park for a Monday Night home opener, but the Bills were also just 6-3 at home last season. One of Buffalo’s road losses came against these Titans, 34-31 in Nashville in week 6 as -6 point favorites.

10 points is a lot to give a well-coached team like Tennessee, but the Titans run defense was atrocious last week. Throw in the extra rest for the Bills and the rabid crowd you have to give the -10 here.