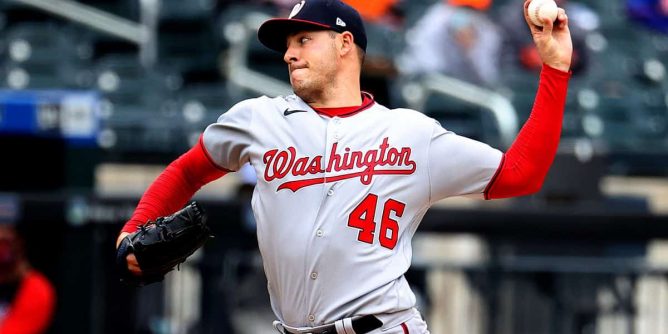 The Washington Nationals (2-3, 1-0 away) continue a three-game National League East series against the Atlanta Braves (2-3, 2-3 home) on Tuesday night. Washington dealt the defending World Series champs an 11-2 loss on Monday to a leg-up on the series. The two teams will meet a total of 19 times this season.

The first pitch for Tuesday’s contest is at 7:20 p.m. EST at Truist Park in Atlanta, GA. Atlanta is favored on the moneyline (-160), while the over-under total is 9.5 runs.

What to Know – Washington Nationals

Washington dropped its first three games to open the season but has bounced back, winning its last two. The Nationals, who traded away critical players before last season’s trade deadline, are going through a roster re-build and projected to finish last in the division.

On the mound for the visitors is lefty Patrick Corbin (0-1, 4.50 ERA, 1.75 WHIP). Corbin toes the rubber for the second time this year after taking the ball in Washington’s season-opener. The 32-year old hurled 4.0 innings, scattered five hits, two earned runs, issued a pair of walks, and struck out four.

Third baseman Maikel Franco began the year 1-for-13 at the plate but collected four hits, a home run, and five RBI in Monday’s triumph over Atlanta. Outfielder Lane Thomas and first baseman Josh Bell added a pair of hits each, with Thomas plating three runners and Bell two. Josh Rogers surrendered one earned run over 5.1 innings for the victory.

The defending World Series champion Atlanta Braves have dropped two in a row heading into Tuesday night’s showdown. Atlanta is widely considered the favorite to repeat as the NL East champions.

Atlanta’s manager Brian Snitker has not announced a starter yet for Tuesday’s contest. Tucker Davidson was a candidate to toe the rubber but was used in relief on Monday and is now unavailable to throw. Expect the Braves to call up an arm from their Triple-A team or use a handful of bullpen arms.

Matt Olsen has filled in nicely for the departed Freddie Freeman. Olsen is hitting .500 (8-for-16) through five games in a Braves uniform with five runs scored and one home run. Outfielder Marcell Ozuna picked up his second multi-hit game of the season in Monday’s loss with a pair of singles.

Atlanta batted .239 against lefties in 2021, and with most of that lineup still intact, the Braves should be able to get a few on the board against Corbin. If Atlanta can get to Washington’s bullpen, the Braves could have a field day against a lackluster pitching staff.

Without knowing who will take the ball for the Braves is difficult, but Washington has scored 15 runs over the last two games after plating only four runs over its first three contests. The Nationals’ offense continues to progress, and Tuesday’s tilt has a high-scoring outcome.