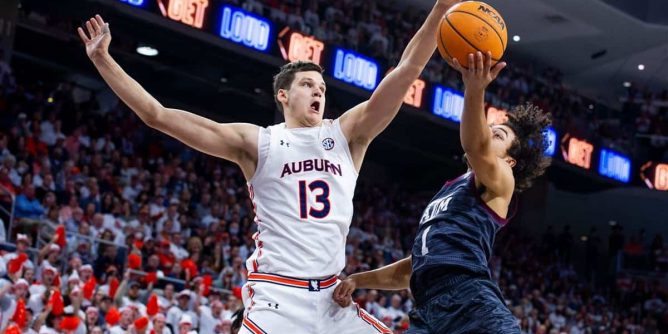 Wednesday’s contest will be the first meeting of the season between the two schools. Vandy ended its two-game winning streak with a loss on Saturday to in-state rival Tennessee, while Auburn bounced back after taking its second loss of the season with a victory over Texas A&M.

The tip-off of the conference clash is at 9 p.m. EST inside Auburn Arena in Auburn, AL. The Tigers are a 13.5 favorite, and the over-under total is at 139.5 points.

What to Know – Vanderbilt Commodores

The Commodores look to continue their solid play in recent games beginning Wednesday night at Auburn. Vanderbilt has won three of its last five contests and is jockeying for conference tournament seeding in the jamb-packed middle of the SEC standings.

A double-digit halftime deficit proved too much to overcome in Saturday’s 73-64 loss to the Volunteers. Scottie Pippen Jr. led the ‘Dores in scoring with 23 points, and Myles Stute added 17. Vanderbilt was outrebounded by Tennessee, 41-31, and turned the ball over 13 times.

Vandy is 13-11 against the spread this season and 6-3 ATS on the road. The Commodores are 10-2-1 ATS in their previous 13 games against the Tigers.

What to Know – Auburn Tigers

Auburn remains atop the conference standings but just one game ahead of the sizzling Kentucky Wildcats. The Tigers are squarely in the mix for a top-seed come tourney time and have a favorable schedule for the remainder of the regular season.

Walker Kessler recorded his second triple-double in six weeks, and the Tigers took out their frustration after a rare loss in a 75-58 blowout win over the Aggies. Kessler filled up the box score, scoring 12 points, grabbing 11 rebounds, and blocking 12 shots. Allen Flanigan paced the Auburn offense with 16 points.

Outside of conference seeding for the tournament, the ‘Dores don’t have a lot to play for. Auburn, on the other hand, is trying to keep off a hot Kentucky squad and maintain one of the top seeds for the NCAA Tournament.

Look for Kessler to have another big night for Auburn, as he will be a matchup problem on offense and defense for Vandy. Pippen Jr. will get his points, but the lack of a supporting cast for the future NBA player will be too much in a home rout for the Tigers.