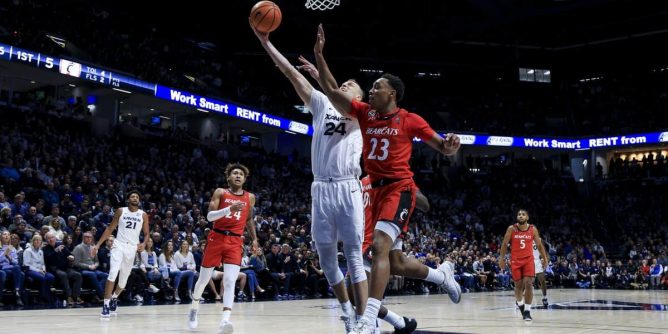 Friday night features a top 25 Big East matchup between the #24 UConn Huskies (16-6, 7-4 Big East) and the #25 Xavier Musketeers (16-7, 6-6 Big East). The contest was initially scheduled for the end of December but postponed to today’s day due to COVID-19 protocols.

Friday’s battle tips off at 7 p.m. EST inside the Cintas Center in Cincinnati, OH. Xavier is a 1.5-point favorite in the conference tilt, and the over-under total is at 139.5 points.

What to Know – UConn Huskies

After dropping its first two contests in February, UConn bounced back with a big conference win over Marquette earlier in the week. The Huskies are tied with the Musketeers sitting in third place in the Big East standings, and UConn is currently projected as a six-seed in the NCAA Tournament.

Adama Sanogo poured in 24 points and grabbed 15 rebounds, leading the Huskies to an 80-72 victory over the Golden Eagles on Tuesday. Tyrese Martin added 18 points and 15 boards. It was Sanogo’s fifth double-double of the seasons and Martin’s third.

UConn is 11-11 against the spread this year with a 3-3 mark ATS on the road. The Huskies are 2-5 ATS over their previous seven games on Fridays.

What to Know – Xavier Musketeers

Xavier aims to snap a two-game losing streak and return to their winning ways after losses to DePaul and Seton Hall. The Musketeers sit tied with UConn in the conference standings and are safely in the current NCAA Tournament projections.

Seton Hall built up a ten-point halftime advantage, holding Xavier to only 27 points in the first half, and never held on to win a narrow 73-71 victory Wednesday night. Xavier shot over 50 percent from the floor but got out-rebounded 41-28 by the Pirates. Jack Nunge scored 22 points, and Paul Scruggs netted 21.

The Musketeers own a 12-11 mark ATS this season and a 7-7 record ATS on their home floor. Xavier is 2-7 ATS over the last nine games and 0-6 ATS in its previous six home matchups.

Friday’s contest is basically a pick ’em between two similar teams. Both teams do a lot of good things but also have their flaws. UConn and Xavier’s defenses rank in the top 50 in the country, but only the Musketeers own an offense that also sits inside the top 50.

Look for Xavier to lean on that offense along with the benefit of a home contest where the Musketeers are 11-3 this season.