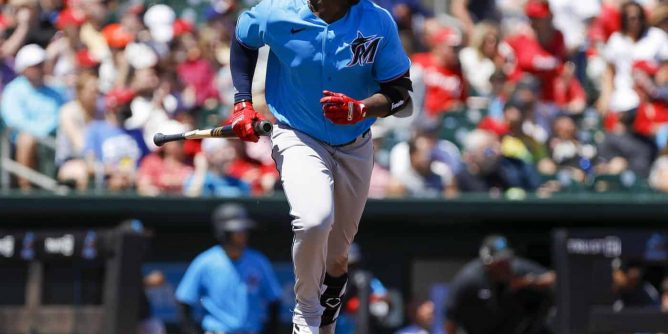 The May 24th Marlins at Rays betting matchup isn’t expected to be an offensive showcase according to experts who have set the run total at just 6.5. The Rays have some value as -149 favorites for the simple fact that they’ve won 15 of the last 17 in the head to head series.

Miami was able to snap a 3-game losing streak with a 4-3 win over Atlanta on Sunday as -121 favorites. Tampa Bay actually dropped two of three in Baltimore over the weekend which was somewhat shocking, but they 13-9 at Tropicana Field not to mention 21-5 in their last 26 interleague home games. 64% of public betting is on Tampa Bay for this matchup.

The Marlins are 17th in HRs in the majors with 40, but they’ve only hit two in the past week. That means Miami will likely need to manufacture runs on Tuesday at the Trop, but that may be tough depending on the status of Miguel Rojas (calf) and Jazz Chisholm (hamstring). Neither could finish Sunday’s game, but perhaps the off day Monday will get them back in the lineup.

Another reason why runs could be at a premium for Miami is because Shane McClanahan is up in the rotation for Tampa Bay, allowing 2 ER or less in 6 of his 8 starts this season. The Marlins averaged 1 run over 5.0 IP in their only appearance against McClanahan last September.

The May 24th Marlins at Rays matchup really could turn into a pitcher’s duel as Pablo Lopez (4-1, 1.57 ERA) has been Cy Young-worthy so far in 2022. The Miami starter has 6 outings where he’s allowed 1 ER or less this season in 8 starts this season, although he did give up 3 ER in just 3.0 IP last Wednesday against the Nationals, bringing his ERA up from a MLB leading 1.05.

Rays Want to Put Baltimore Series Behind Them

Tampa Bay had Monday off to reflect on just what happened as they lost two of three to the last placed Orioles over the weekend. They gave up 15 runs in the two defeats so a better pitching performance will appease manager Kevin Cash on Tuesday night.

McClanahan (2-2, 2.52 ERA) is the right guy to have on the mound for a bounce back game from the Rays pitching staff. The left-hander has gone 7.0 IP in each of his last two starts, allowing just 1 total ER over that span. McClanahan is 2-2 with a 2.89 ERA in four home starts this year compared to 1.47 in three on the road.

Much like the Marlins, Tampa Bay’s offense is a bit banged up ahead of the series opener with Wander Franco battling leg injuries and possibly heading to the IL while Yandy Diaz missed Sunday’s game with a shoulder issue. Isaac Paredes has picked up some of the offensive slack with 3 HRs in his last 12 ABs.

There’s not a ton of value on Tampa Bay at -149 coming off two of three losses in Baltimore. Both teams are a bit banged up on offense and facing a couple of aces in the making. Have to go with the ROI in a game that could end 1-0.