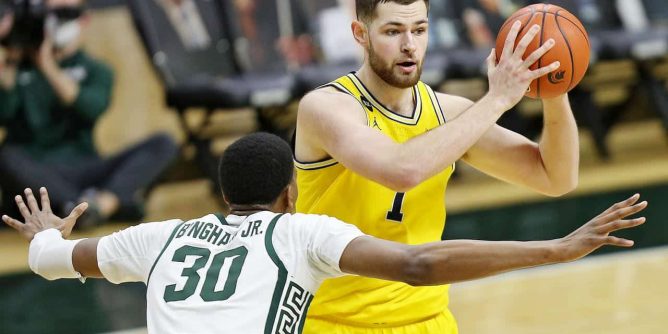 Heading into the March 1st Michigan State at Michigan betting matchup, both teams have a real busy week ahead of them leading up to the Big Ten Tournament. The Spartans and Wolverines each play Tuesday, Thursday, and Sunday to wrap up the regular season, but none of the remaining games are as big as this in-state rivalry matchup.

The Spartans go for the season sweep as they’ve already pocketed an 83-67 win in East Lansing to easily cover the -4 point spread on January 29th. MSU is possibly in a letdown spot following Saturday’s 68-65 win over #4 Purdue and Michigan State has also lost five of their last seven. Michigan lost 93-85 to Illinois on Sunday in a PK game, continuing UM’s streak of alternating wins and losses over the last six games.

Michigan State was right in the hunt for the Big Ten regular season crown heading into February, but a 3-5 month ended those hopes as the Spartans have fallen to 10-7 in conference play. The good news is that the month ended well with a 3-point win against #4 Purdue as +4.5 underdogs on Saturday, and March is usually when Tom Izzo brings the best out of his teams.

Izzo goes for a landmark in the March 1st Michigan State at Michigan betting contest, with a victory pushing him past Bobby Knight for the most Big Ten coaching wins. A win would also give the Spartans a season sweep over the Wolverines and would be the third straight in the series.

Michigan State is just 8th in the Big Ten in scoring (72.1 ppg) but they still have some of the best offensive depth in the conference. Four players scored in double figures in the first game against Michigan including A.J. Hoggard having 11 points and 10 assists off the bench. Hoggard has since made his way back into the starting lineup and had 11 against Purdue as four more MSU players scored in double figures to take down the Boilermakers.

Michigan Due for a Win

The Wolverines have alternated wins and losses the last six games, meaning they look due for a win on Tuesday night especially as -5 point favorites. Michigan had no answer for Illinois big man Kofi Cockburn on Sunday, as the 7-footer pumped in 27 points on 11-15 shooting. The Spartans have a 7-foot reserve in Marcus Bingham, Jr. but he’s nowhere near the force that Cockburn is (8.9 ppg, 6.0 rpg).

Michigan’s Devante Jones almost willed his team to victory against Illinois with 25 points and 10 assists, but Cockburn’s presence limiting Hunter Dickinson to 13 points is likely what did the Wolverines in. Freshman Caleb Houstan posted his second straight 21 point outing, and Dickinson should be better considering he went for 25 in the first meeting with the Spartans.

The line seems a bit high with the Wolverines giving -5 points in this spot, as the Wolverines are still coached by interim Phil Martelli who is 1-1 while Juwan Howard serves his five game suspension after the altercation following the Wisconsin loss. Michigan is just 9-4 at home this season, but the Spartans are in a letdown spot after the win over Purdue.
Michigan 72 – Michigan State 64