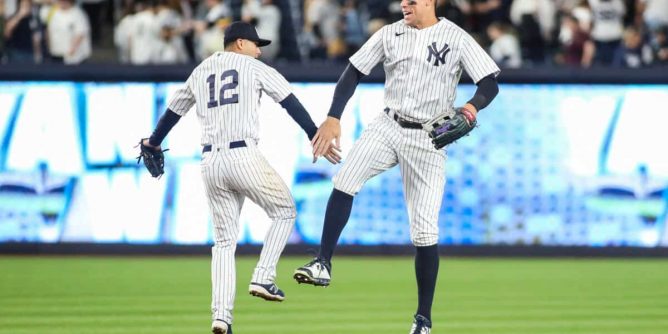 The New York Yankees (18-7, 10-3 home) host the Texas Rangers (10-14, 6-5 away) in the series-opener of a three-game set beginning Friday night. The American League showdown will be the first season meeting between the two franchises.

Friday’s first pitch is scheduled to be thrown at 7:05 p.m. at Yankee Stadium in the Bronx, N.Y. New York is heavily favored (-240) on the moneyline, and the over-under total is seven runs.

What to Know – Texas Rangers

The Rangers head to the East Coast riding a four-game winning streak. Texas took a pair from the Philadelphia Phillies earlier in the week and sits in 5.5 games back in the AL West standings.

The expected starter for the visiting Rangers is right-hander Glenn Otto (1-0, 2.89 ERA, 0.96 WHIP). The 26-year-old starter has appeared in two contests this season, tossing 9.1 innings and surrendering three earned runs on six hits with ten strikeouts. Otto lasted 4.1 innings in his last trip to the mound, picking up a no-decision against Houston.

Shortstop Corey Seager, signed in the offseason from the Dodgers, has boosted the Rangers lineup hitting .258 with four home runs and 12 RBI. Outfielder Adolis Garcia picked up where he left off last season, swatting four home runs and driving in 18 over 24 games.

Texas ranks 24th in the league with a .224 team batting average, scoring 4.3 runs per game. The pitching staff for the Rangers sports a 4.23 ERA, good enough for 25th in the MLB.

New York snapped its eleven-game winning streak in the series finale against the Toronto Blue Jays on Wednesday. Even with the loss, the Yankees remain in first place in the AL East with a 2.5-game cushion over the Tampa Bay Rays.

The Yankees hand the ball to their ace Gerrit Cole (2-0, 3.00 ERA, 1.17 WHIP) in the opener. Cole hasn’t surrendered a run over his last two trips to the mound. The 31-year-old has made five starts, allowing right earned runs over 24 innings on 18 hits with 27 punchouts.

First baseman Anthony Rizzo and outfielder Aaron Judge are tied for the league lead with nine home runs apiece. The Bronx Bombers have 35 home runs as a team, tied with the Milwaukee Brewers for most in the MLB. Rizzo leads the Yankees with 21 runs driven in, one of four New York starters with 12 RBI or more.

The Yankees average 4.8 runs per game and rank fifth in the majors with a .248 team batting average. New York’s pitching staff features the league’s second-best ERA at 2.60.

The Yankees have one of the best records in baseball and return to Yankee Stadium, where they are 10-3 this year. Texas rolls into the Bronx riding high, but the Rangers face a tough matchup with Cole and the New York offense. New York wins the opener comfortably.