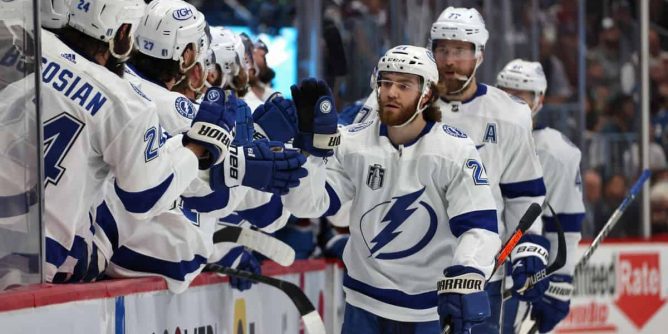 The Colorado Avalanche won Game 4 over the Tampa Bay Lightning 3-2 in overtime. Nazem Kadri scored the game-winning goal for Colorado, and this was the first time in 18 days he has played a game due to a finger injury. Game 5 will take place on Friday, June 24, with puck drop set for 8:00 p.m. ET at Ball Arena in Denver, Colorado, on ABC.

The Avalanche are one win away from winning their first Stanley Cup title since 2001 against the New Jersey Devils in seven games. It would be Colorado’s third in franchise history. The Lightning are looking to keep their three-peat hopes alive.

Colorado is favored by 1.5 goals over Tampa Bay.

Victor Hedman has been quiet in these Stanley Cup Playoffs for the Tampa Bay Lightning. He only scored his third goal this postseason for Tampa Bay in Game 4. Hedman has recorded at least one point in three of four games this series and the last three of five games overall for the Lightning.

Anthony Cirelli scored only his third goal of the playoffs for the Tampa Bay Lightning. He has scored at least one goal in the last two games played. Cirelli will need to play well in Game 5 to potentially extend their season, though.

Andrei Vasilevskiy stood on his head all game long for Tampa Bay in Game 4 with 34 saves. He is projected to be the starting goalie for Game 5.

Vasilevskiy needs to close the door down if they want a chance to come back from a 3-1 series deficit. It has not been done since the 1942 Stanley Cup Finals.

Colorado Avalanche: Knocking On the Door

Nathan MacKinnon scored his 12th goal of the Stanley Cup Playoffs in Game 4 for the Colorado Avalanche on the power play. He has recorded at least one point in the last four of five games for Colorado and has also scored at least one goal in two of those five games. MacKinnon is on the verge of winning his first Stanley Cup title.

Cale Makar has recorded 20 assists in the Stanley Cup Playoffs for Colorado. He has seven total assists in his last five games played. Makar has had two or more points in three of those five games.

Darcy Kuemper was much better in Game 4 with the Avalanche and made 37 saves. He was sharp all game long. Kuemper is projected to be the starting goalkeeper in Game 5.

This feels like the night when the NHL season ends. The Colorado Avalanche are favored by -1.5 goals against the Tampa Bay Lightning. The over/under goals total is six. Game 4 had that total go under, but the first two games of this series at Ball Arena in Denver, Colorado, had it go over though.

The Colorado Avalanche will win Game 5 over the Tampa Bay Lightning in convincing fashion by a final score of 6-2. Bet Colorado (-1.5) over Tampa Bay and bet the over six goals total scored in Game 5 of the NHL Stanley Cup Finals.