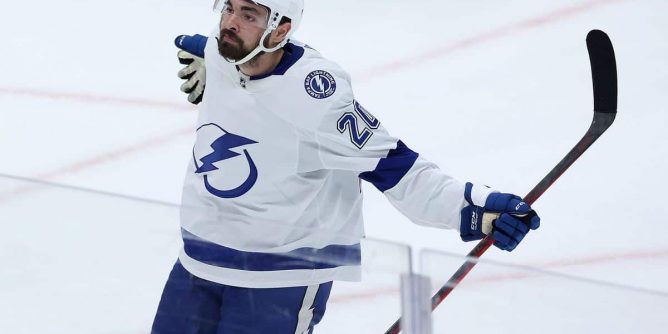 Game One of this best of seven series provided the much-anticipated excitement of the Stanley Cup Finals. Colorado came out flying with three goals in the first period while Tampa worked to claw their way back into the game, which ultimately went to overtime.

The Avalanche were able to sneak one by the Lightning in overtime and finish Game One with a 1-0 series lead. If Game One is any indication of how this series is going to go, it will be a long, hard-fought series. One for the ages.

Game Two will be at Ball Arena in Denver, with puck drop scheduled for 8:00 PM EST. Fans can tune in to ABC to watch Game Two of the Stanley Cup Finals.

The Tampa Bay Lightning were able to muster a chance at victory after falling behind 3-1 in the first period. They clawed their way back to tie the contest but fell short in overtime.

This team has shown that they have resilience; the big issue is if they can bring the pace and intensity they had in the latter part of Game One into the first shift of Game Two.

An unsung hero for the Lightning has been the recently acquired forward, Nick Paul. Paul recorded his fourth goal this postseason in Game One. He has been one of Tampa’s best penalty killers and a major factor in their roster makeup. Keep an eye out for him throughout this series.

Netminder Andrei Vasilevskiy once again did everything he could to keep his team in the game. He registered 34 saves but unfortunately came away with a loss. He will once again be called upon to go toe to toe against one of the best offenses in the NHL.

In Game One, the Colorado Avalanche continued to do what they do best, get off to another quick start. They were flying out of the gate in Game One with three goals in the first period. The Avs were unable to sustain the scoring ability in the first until the resurgence of their offensive attack in overtime broke through and won them the game.

The always versatile Gabriel Landeskog led by example for Colorado in Game One. He ended the contest with one goal and one assist. The captain of the Avalanche is doing everything in his power to will this team to a Stanley Cup championship.

Goalie Darcy Kuemper did enough to earn the victory in Game One, and he will be tasked with stepping it up even further for his team in Game Two.

Overall, Game One provided back and forth scoring chances, a tense atmosphere, and playoff excitement. Expect much of the same in Game Two. Both of these teams will surely make adjustments to combat their opponent’s strengths.

Colorado will look to exploit Tampa’s defense and use their speed to keep the Bolts at bay, while Tampa will try to use the momentum that they built on the back half of Game One to provide the spark they’ll need to get a quick start in Game Two.

The two-time defending champs have been one of the best teams in recent history in winning games after they have lost the previous one. Look for the Lightning to win Game Two on the moneyline with +134 odds.