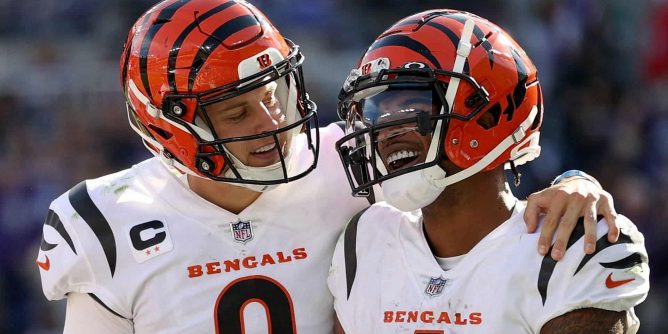 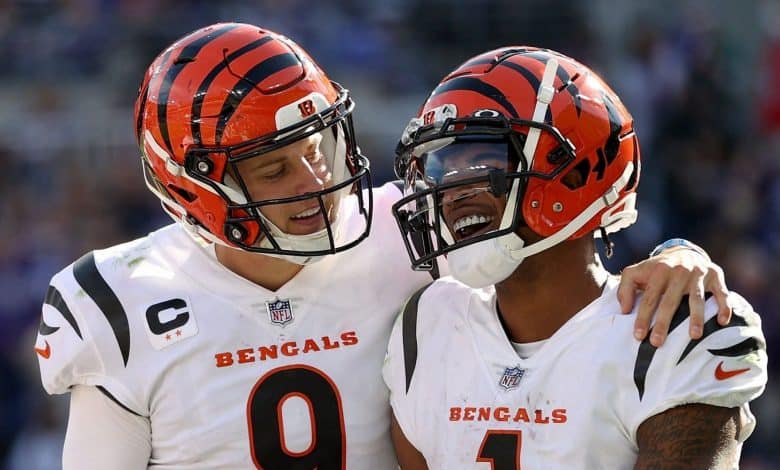 Joe Burrow and Ja’Marr Chase head into Super Bowl LVI against the Rams.

Super Bowl LVI Cincinnati Bengals prop bets are coming in hot and heavy.. It’s no shocker that most of the Bengals’ wagers are revolving around QB Joe Burrow as well as WR Ja’Marr Chase (and RB Joe Mixon). Wagering on the star studded Rams is a little more diverse, but let’s take a look at what some of the best plays are for Cincinnati, who is a +4.5 underdog and +170 in moneyline betting.

The Bengals put the ball in Joe Burrow’s hands that’s no secret. He’s thrown at least 34 passes in 7 of the last 8 games and has completed more than 23 passes in 7 of the last 8 as well. In four of those games Burrow also had 23 or 24 completions so the oddsmakers are dialed in with this number. Joe Mixon has 6+ catches in 3 of the last 5 so some early checkdowns to ease the nerves a bit would go a long way towards the ‘over.’

Burrow had 25 rush yards in the AFC Championship Game which was largely aided by an 11-yard scamper. 12.5 yards seems very high against a swarming Rams defense that features Von Miller and Leonard Floyd pushing in the edges and Aaron Donald stuffing the middle. Burrow has only ran for over 12.5 yards two other times this season.

San Francisco carried the ball 18 times in the NFC Championship game between Elijah Mitchell and Deebo Samuel and it’s no secret that the Bengals would love to get their rush offense going on Sunday. Mixon is the unquestioned workhorse for the Bengals and he’s carried the ball at least 17 times in 8 of the last 10 games. Obviously Mixon getting a lot of carries hurts the Burrow ‘over’ props, but both can be true also. Burrow has success early and Mixon wears out the clock at the end.

Ja’Marr Chase Under 7 Receptions
Under 81 Yards

Chase has a tough matchup for Super Bowl LVI Cincinnati Bengals prop bets up against arguably the best cornerback in the league Jalen Ramsey. Chase has double digit targets in three of the last six, but he also only has gone over 7 receptions three times all season. With the type of pressure that the Rams can put on Burrow it’s also going to be hard for Chase to get loose for his patented deep ball which makes the ‘under’ of the yardage total look solid too.

Another one of the solid Super Bowl LVI Cincinnati Bengals prop bets is over 2.5 TDs as a team. The Bengals were 7th in the league this year scoring 27.1 ppg and the Rams allowed 21.9 ppg. The 49ers managed two TDs vs. Los Angeles in the NFC Championship game and they had two quarters where they were scoreless.

Assuming the Bengals find themselves behind in this game they could be looking at a garbage time TD against a prevent defense which gives TE CJ Uzomah great value at +1600. Even in a close game expect Burrow to be looking towards Uzomah for what could be a potential game winner.