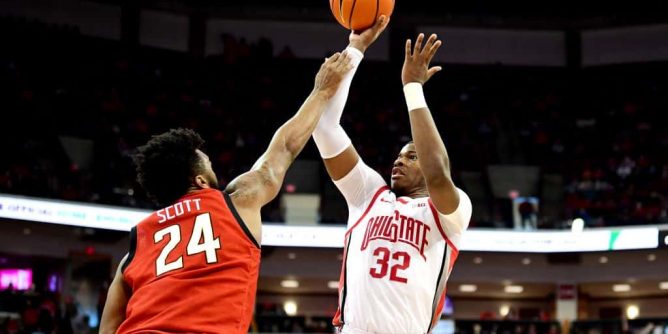 OSU will try to avoid a letdown heading into the February 27th Ohio State at Maryland betting matchup. The Buckeyes toppled Illinois 86-83 in Champaign on Thursday as +6.5 underdogs, and now head to College Park where the Terrapins are a disappointing 8-8 on the season.

At 11-5 in conference play, the Buckeyes need a win to keep up with 14-4 Wisconsin for a possible #1 seed in the Big Ten tournament. Maryland is 13-15 on the year playing in a tough conference, but they’re down to a 3.2% chance to make the NCAA Tournament. A Terrapins win as +4 point underdogs would definitely help their cause.

Ohio State in Line for the Upset

The Buckeyes being just -4 favorites in this matchup seems on the low side, especially with OSU looking dominant at times in Champaign up 16 points in the 2nd half before a late Fighting Illini run. Ohio State also beat Michigan 68-57 as +3 point underdogs in their previous road game, so this is a team that can win away from Columbus.

The Buckeyes did get upended 75-62 at home to Iowa on February 19th as -5.5 favorites, but otherwise this looks like a team ready for the postseason with wins in four of their last five. Junior E.J. Liddell has been a force in Columbus for three years, but he’s found a partner in crime lately in freshman Malaki Branham.

Branham had 31 points at a tough road venue in Champaign, his third straight game with 22+ points. Maryland has the 3rd worst defense in the Big Ten (70.6), meaning Liddell should be in line for another big outing as he has 15+ in 9 straight.

The Terrapins have won two of their last three, but those have come against Penn State and Nebraska – two other struggling teams – and Maryland was favored in both. Otherwise it’s six straight losses as underdogs for the Terrapins and they are just 2-4 ATS over that span.

Maryland’s most recent loss was 74-64 at Indiana on Thursday as +6.5 underdogs. There wasn’t a whole lot of positive to take out of that game – especially on defense with the Hoosiers shooting 60% (28-47) from the floor. Fatts Russell was one of the bright spots with 23 points aided by 5-9 shooting from three point range. Russell has 20+ in 4 of the last 5.

It’s hard to see Maryland keeping this one within +4 points especially since Ohio State won the first meeting this season 87-62. Liddell was dominant in that game with 24 points and 11 rebounds, and Branham had yet to come into his own as he’s done down the stretch. The Buckeyes shot 51% in that game which was their third straight in the series. Donta Scott led Maryland with 25 points.

80% of the public likes Ohio State in this contest and this line definitely looks too easy. The game opened at OSU -4.5 and has dropped a point despite all that action. There’s no doubt that the Buckeyes are the better team here and have a lot more to play for, but they could be in line for a letdown following the Illinois win. Line discipline makes this a play on the Terrapins.
Ohio State 68 – Maryland 69