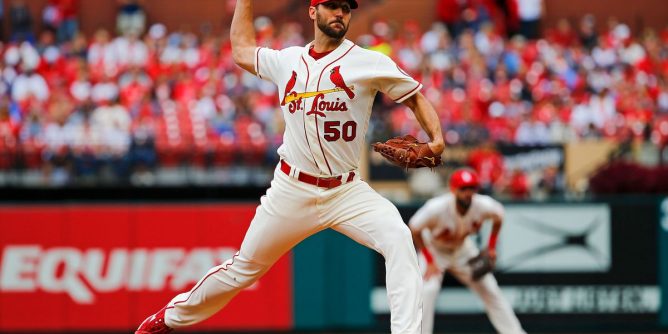 The Toronto Blue Jays (54-43, 31-19 home) host the St. Louis Cardinals (51-47, 22-27 away) in the second game of a two-game set between these interleague franchises. Toronto rolled to a 10-3 victory in the opener on Tuesday night and owns a 2-1 head-to-head record against the Cardinals this season.

The first pitch of Wednesday’s tilt is at 7:07 p.m. EST at the Rogers Centre in Toronto, Ontario. Toronto is a heavy favorite at -250, and the over-under total is eight runs.

St. Louis looks to avoid losing their third in a row and fourth in five games but will have to do so without the presence of their top two hitters. Paul Goldschmidt and Nolan Arenado did not make the trip to Toronto because they are both unvaccinated from COVID-19. The Cardinals have slipped to three games back in the National League Central standings.

Looking to help the Cardinals break out of their losing streak is right-hander Adam Wainwright (6-8, 3.40 ERA, 1.24 WHIP). The 40-year-old has lost three of his last four starts on the hill, including surrendering seven runs over 5.1 innings in his last trip. This season, Wainwright has pitched 116.1 innings and allowed 44 earned runs on 110 hits and 34 walks while striking out 91 batters.

With Goldschmidt and Arenado absent from the lineup, it is up to the likes of Tommy Edman, Dylan Carlson, and Tyler O’Neill to produce at the dish. Carlson had a pair of hits in the opener, including a solo home run in the first inning of yesterday’s defeat. Edman added a pair of singles and a walk out of the leadoff spot.

The Cardinals’ offense ranks ninth in the majors with a .251 team batting average that produces 4.6 runs per game. The pitching staff for St. Louis sports a 3.90 team earned run average, 14th in the MLB.

What to Know – Toronto Blue Jays

The Blue Jays carry a seven-game winning streak into Wednesday’s tilt, including four straight at home. Toronto still trails the New York Yankees in the American League East by 11.5 games.

Looking to keep the Blue Jays in the win column is righty Kevin Gausman (7-7, 3.00 ERA, 1.29 WHIP). Gausman has had some up and down outings this year but is coming off a victory in his last start, where he tied his season-high for strikeouts with ten. Over 99.0 innings of action, he’s issued 33 earned runs on 110 hits and 18 walks with 116 strikeouts.

The offense for Toronto is stacked from top to bottom and led by the hitting of Vladimir Guerrero Jr. The slugging 23-year-old has 21 home runs and 62 runs batted in. Both Bo Bichette and Matt Chapman have over 50 RBIs, while George Springer leads the team with 56 runs scored.

Toronto’s offense is the best in the league scoring 4.9 runs per contest and hitting .268 as a team. The Blue Jays’ pitching staff is 16th in the majors with a 3.93 team ERA.

The Cardinals missing their top two hitters against the one of the best offenses on the road is a tough test. Toronto has the momentum and the lineup to deal the Cardinals another loss, and the absence of Goldschmidt and Arenado is just too much to overcome.