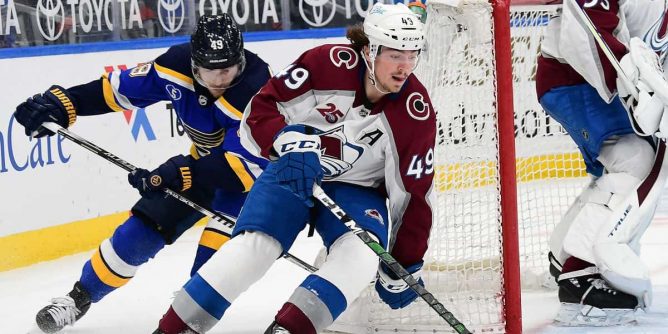 The Blues are in third place within the Central Division but are tied with the Minnesota Wild (51-21-7) in points (109), though the Wild have a game in hand over St. Louis.

The Avalanche have already clinched the Central Division title and the best record in the Western Conference with 116 points; Colorado has the second-best mark in the NHL, behind only the Florida Panthers (57-16-6, 120 points).

Let’s look at the latest news, stats, injury reports, and NHL odds for Blues vs. Avalanche.

On Tuesday, the St. Louis Blues enter their final away game of the regular season, playing some of the best hockey in the entire NHL. The Blues have earned points in 16 straight games (14-0-2).

The Blues were 6-3 winners over the Anaheim Ducks, favored -195 with an over-under of 6.5 goals. It was the fifth time over the last seven games that the Blues had scored five or more goals in a game.

Four players have 70 points or more for the Blues this season, including Vladimir Tarasenko (82), Robert Thomas (77), Pavel Buchnevich (75), and Jordan Kyrou (70). Tarasenko leads the team in goals with 34, followed by Buchnevich with 30 goals. The Blues’ 3.78 GF/G is best in the Western Conference and third in the NHL behind only the Toronto Maple Leafs (3.80 GF/G) and Florida Panthers (4.16 GF/G).

The Colorado Avalanche return to home ice after dropping three-straight road games to the Winnipeg Jets, Edmonton Oilers, and Seattle Kraken, where they were outscored, 13-6. Overall, the Avs have lost a season-high four games in a row.

In their most recent game, the Avalanche fell to Winnipeg 4-1, despite being favored (-182). Colorado is now 51-21 when favored on the money line.

The Avs have three games remaining to turn things around before the start of the 2022 Stanley Cup Playoffs.

“I think our work is cut out for us here to get our guys back to playing our game, getting back to our identity,” Avalanche head coach Jared Bednar said. “It starts with the work, the competitiveness. Moves on to execution, details, the whole gamut now. We’ve seen it all over the last four games.”

Rantanen, who leads the Avs in goals (36), missed the Avalanches’ previous game against the Jets and is questionable for Tuesday night. MacKinnon (32) is second on the team in goals, while Gabriel Landeskog (30) is third but is out indefinitely after undergoing knee surgery.

The Avalanche has one of the league’s top defenses, averaging 2.80 GA/G, which is second in the Western Conference and seventh in the NHL.

In two meetings, the Blues and Avalanche have gone 1-1-0.

St. Louis is still jockeying with the Minnesota Wild for home ice in the first round of the playoffs. Meanwhile, Colorado has their spot locked up, but with losses in their past four games, getting some momentum will be crucial here.

The Avs are 31-5-3 at home this season, best in the Western Conference. Count on Colorado to snap the skid and get back into the win column.