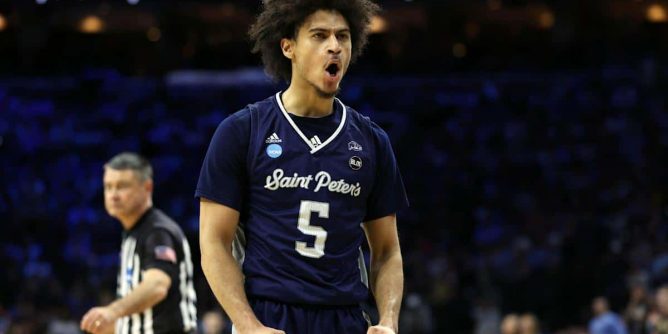 The historic Cinderella run continues for the fifteenth-seeded Saint Peter’s Peacocks (22-11) as they challenge the eighth-seeded North Carolina Tar Heels (27-9) in the Elite Eight and East Region finale. Saint Peter’s became the first 15-seed to advance to the Elite Eight with a 67-64 victory over Purdue. North Carolina held on to defeat UCLA in the Sweet 16, 73-66.

Sunday’s contest tips off at 5:05 p.m. EST inside the Wells Fargo Center in Philadelphia, PA. The Tar Heels open as an 8.5-point favorite, with the over-under total at 137.0 points.

What to Know – #15 Saint Peter’s Peacocks

Saint Peter’s has won ten in a row and captured the hearts of many casual basketball fans as they continue its historic run in March. The Peacocks finished second in their conference but went on to win the Metro Atlantic Athletic Conference Tournament to lock up their tournament bid.

The defense was the equalizer on Friday night against a talented Boilermaker squad. Saint Peter’s continually disrupted the Purdue offense, forcing 15 turnovers and holding the Boilermakers to 5-of-21 shooting from the outside. Daryl Banks III led the Peacocks in scoring with 14 points.

The Peacocks are 24-9 against the spread and a perfect 6-0 ATS playing on a neutral court. Saint Peter’s is 10-0 ATS over its last ten contests.

The Tar Heels are putting together a Cinderella run of their own as they look to advance to the Final Four for a record 21st time in school history.

UNC hasn’t reached the Final Four since 2017 and would be the ninth-straight decade a Tar Heels team has made it. UNC finished one-game behind Duke in the ACC under first-year head coach Hubert Davis.

A back-and-forth contest until the end, North Carolina and UCLA tangled in a classic battle of blue-blood programs in the Sweet 16. Caleb Love erupted for 30 points, and Armando Bacot added 14 points and 15 rebounds.

North Carolina is 19-16-1 ATS and an even 4-4 ATS at a neutral location. The Tar Heels are 4-1 ATS in their last five games playing as the favorites.

There is no slowing down this Saint Peter’s squad that is playing with a chip on their shoulder. The Peacocks have already knocked off powerful programs in Kentucky and Purdue but do they have the firepower to do it again on Sunday? North Carolina has turned up its play in the tournament and will get all they can handle from the Peacocks.

Expect the Peacocks to slow down the pace of play with their press and strong defense. We like the Peacocks to cover here with a rooting interest in a straight-up victory.