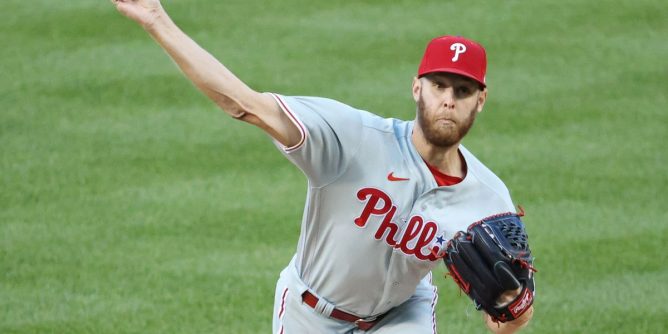 The St. Louis Cardinals (45-40, 24-16 home) matchup against the Philadelphia Phillies (44-39, 20-18 home) in the series opener of a four-game set on Friday night. The Phillies took two of three from the Cardinals early this week in Philly.

The first pitch of the series opener is set for 8:15 p.m. EST inside Busch Stadium in St. Louis, Missouri. The Phillies are a slight betting favorite on the road at -115, and the over-under total is 7.5 runs.

What to Know – Philadelphia Phillies

Philadelphia travels to St. Louis after defeating the Washington Nationals two of three times during the week. The Phillies are third in the National League East, eight games behind the leading New York Mets.

The expected starter for the visitors is right-hander Zack Wheeler (7-4, 2.66 ERA, 1.07 WHIP). Wheeler looks to shut down the Cardinals offense again after tossing a shutout over seven innings last Sunday against St. Louis. The 32-year-old has 88.0 innings under his belt, allowing 26 earned runs, 74 hits, 20 walks, and striking out 99.

Kyle Schwarber is having an excellent season at the dish, sitting second in the majors with 27 home runs. The former Chicago Cub has driven in a team-high 56 runs. Rhys Hoskins and Nick Castellanos have added more run support for Philly’s offense while Bryce Harper remains on the injured list.

The Phillies average 4.8 runs per game and rank 10th in the MLB with a .248 team batting average. The pitching staff for Philadelphia has a 3.80 team earned run average, 12th in the majors.

The Cardinals broke their four-game losing streak last night with a victory over the Atlanta Braves but have lost six of their last eight. St. Louis is still battling the Milwaukee Brewers for the top spot in the NL Central, trailing by 2.5 games.

On the hill for the hosts is veteran right-hander Adam Wainwright (6-6, 3.26 ERA, 1.27 WHIP). The 40-year-old surrendered a pair of home runs to the Phillies his last time out, serving up four earned runs in the loss. This season, Wainwright has pitched 96.2 innings, giving up 35 earned runs on 96 hits and 27 walks with 81 strikeouts.

The hitting duo of Paul Goldschmidt and Nolan Arenado hasn’t slowed down through the first half of play. Goldschmidt is second in the MLB in both batting average (.342) and RBIs (65), while Arenado has added 17 home runs and 55 RBIs. Rookie Juan Yepez has 11 home runs in his first 56 games in the majors.

St. Louis is eighth in the league sporting a .251 team batting average and scoring 4.6 runs per game. The Cardinals’ pitching is 13th in the MLB with a 3.83 team ERA.

After a short turnaround, these two teams are back at it against each other to close out the week. Philly took two of three in the first series, and even without Harper in the lineup, look for the visitors to have some scoring success against Wainwright. Wheeler keeps the Cardinals’ offense in check again.