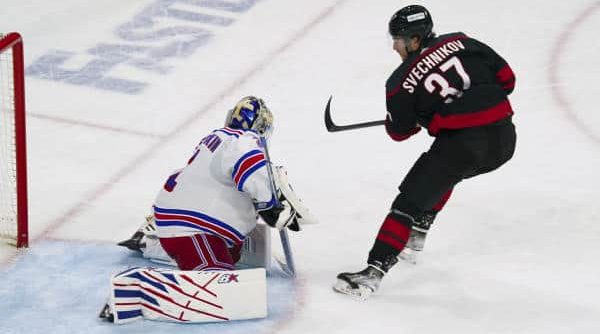 Both teams in the Rangers at Hurricanes Game 7 betting matchup have taken the old adage that a ‘series doesn’t start until you lose at home’ to heart, with the 3-3 knot coming as each squad has won on their own ice. By default that would seem to favor Carolina with the game being at PNC Arena, a place the ‘Canes were 29-8-4 during the regular season.

Can New York steal one as +130 underdogs on Monday night and head to face the Tampa Bay Lightning in the Eastern Conference Finals? If they do, it will be the first loss of this postseason at home for Carolina (7-0) who is a -149 favorite in this elimination game. 68% of the public are backing the Hurricanes to keep their home win streak going.

New York is on the verge of elimination on Monday night, but this is the same spot they were in on Saturday night as well as in Games 6 and 7 in the first round against the Penguins. The Rangers have gone on to win those contests 5-2, 5-3, and 4-3 respectively.

The Rangers are stepping up in net and on offense when they’ve needed to. Tyler Motte, Mika Zibanejad, and Flip Chytil all had early goals in Game 6, enough so that Carolina goaltender was pulled after giving up 3 goals on his first 13 shots faced. Zibanejad has scored in four straight games this series and defenseman Adam Fox has a goal and five assists over that span.

One of the reasons New York has some value in the Rangers at Hurricanes Game 7 betting contest is because NYR goaltender Igor Shesterkin can put the team on his back in this spot. He gave up 3 goals total in the Games 1 and 2 losses in Carolina but got no offensive support, but did allow 3 in the Game 5 loss.

Carolina has gone 7-0 in this postseason, but the reason they are facing a second straight Game 7 is because they are 0-6 in road tilts. The Hurricanes beat Boston 3-2 in an elimination game in the first round, but it’s still hard to trust a team that can be that good at home yet so bad on the road.

Another reason to feel a little iffy about the Hurricanes in this spot is because Raanta has to be at least a little frazzled after being pulled early on Saturday after giving up 3 goals on 13 shots. He also gave up 4 goals on 28 shots in New York in Game 4, but has only allowed 2 scores in three home tilts this series.

Carolina will once again try to get to Shesterkin on Monday night, something they did in Game 5 last Thursday with Vincent Trocheck scoring a SH goal, Teuvo Teravainen finding the back of the net on a power play, and Andrei Svechnikov adding the capper in the 3rd for the 3-1 win. Sebastian Aho has been held scoreless in four straight so it wouldn’t hurt Carolina to get him going in Game 7 either.

Carolina has been great at home this postseason and -149 isn’t a horrible price to pay for a team that doesn’t lose on their own ice in the past month. That being said, the Rangers won in a pressure situation in Pittsburgh last round and have the goaltending edge on paper.