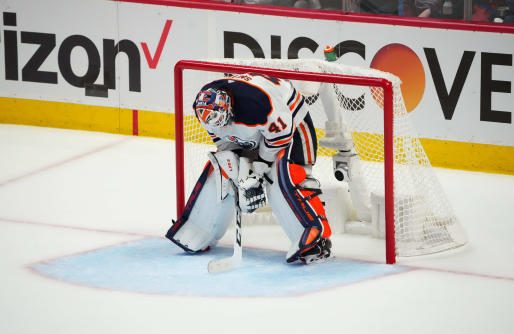 The Western Conference Finals switch back to Edmonton for Avalanche at Oilers game 3 betting. Colorado has taken a 2-0 series lead, surviving an 8-6 shootout to win game 1 as -197 favorites and then shutting out one of the best offenses in hockey with a backup goaltender in Thursday’s 4-0 victory at -174.

The Oilers are in a hole, but they can even things right back up with two wins at Rogers Place where they are 4-2 this postseason. Of course in order to get a win on Saturday night Edmonton has to both a) figure out how to stop this Colorado offense and b) get some goals of their own after being shut out on Thursday. The Avs’ are -135 as they try to go up 3-0.

Colorado With the Mojo

Starting goaltender Darcy Kuemper left the series opener with what appeared to be an upper body injury (after allowing 3 goals on 16 shots). Not only did Pavel Francouz come in to hold on to the 8-6 lead in Game 1, he sprung back with a 24 save shutout on Thursday night which was highly unexpected against this star-studded Edmonton offense.

It’s going to be a struggle for Francouz to stonewall the Oilers for a second straight time, but he doesn’t need to be great with the offense he has on his side. The Avs’ were the #4 scoring team during the regular season (3.8 goals/game) and have already found the back of the net 14 times through the first two games.

The big kahunas are stepping up for the Avalanche, with Nathan Mackinnon, Mikko Rantanen, and Gabriel Landeskog combining for 5 goals and 5 assists the two games in Colorado. Artturi Lehkonen has added a goal and 2 assists as the Avs’ continue to show outstanding depth.

You almost have to feel for Edmonton goaltender Mike Smith a bit heading into the Avalanche at Oilers game 3 betting matchup. He’s had to face Calgary’s #6 scoring offense in the semifinals only to get greeted with this high-powered Colorado team in the conference finals.

Smith was pulled in the 2nd period in Game 1 after giving up 6 goals on the first 25 shots he faced. He allowed 4 goals on Thursday night, but also faced 40 shots. Smith has a GAA of 2.19 with a save percentage of .936 in going 4-2 at home this postseason.

Much like Colorado, Edmonton’s stars were on fire in Game 1. Connor McDavid, Evander Kane, and Ryan Nugent-Hopkins had goals with Leon Draisaitl adding 2 assists. That offense sputtered in game 2 though, managing just 24 shots including Zach Hyman having his six game goal streak snapped.

Can the Oilers offense return to form back at home – and will Colorado’s offense finally look human going on the road. Those are the questions presented to bettors on Saturday night. There’s definitely some value on Colorado at -135 compared to their pricing in the first two rounds, but 64% of the public likes Edmonton back at home.

The best play for this contest is on the total. Game 2 was low scoring but Francouz will not get a second straight shutout why there also isn’t a whole lot of trust in Smith in this spot even back at home.