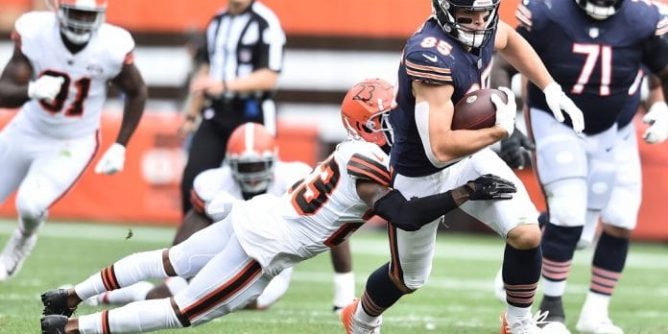 Chicago tries to close out their exhibition schedule 3-0 as the visit Cleveland for the preseason Bears at Browns matchup on Saturday night. It’s been a good first camp for Chicago head coach Matt Eberflus, who is using this game as an extended dress rehearsal saying starters will play up to the entire first half.

Cleveland has gone 1-1 in Kevin Stefanski’s second preseason after going 3-0 in 2021. Stefanski said his starters will play as well but did not say for how long. That means QB Jacoby Brissett will get his first snaps of the preseason, finally being named the official week 1 starter after Deshaun Watson’s 11-game suspension was handed down. The Browns are a somewhat surprising -3 point favorite here.

Protect Fields at All Cost

The Bears #1 goal on Saturday night is to protect their QB Justin Fields, especially if Myles Garrett (16 sacks last year) gets some extended time for Cleveland. The 2nd year QB out of Ohio State was sacked 9 times against Cleveland in his NFL debut last season. Fields was 4/7 for 48 yards in a win over the Chiefs and 5/7 for 39 yards vs. the Seahawks last week which are solid numbers behind a shaky offensive line.

Fields doesn’t have a ton of weapons at his disposal, but TE Cole Kmet did have 2 catches for 31 yards last week in his first preseason action. What’s really been impressive so far for Chicago has been their backup signal callers as Trevor Siemian has thrown 3 TD passes and Nathan Peterman has completed 12 of 20.

Defense is Eberflus’ calling card and he’ll get to see his unit with Roquan Smith for the first time this week. The linebacker ended his holdout and returned to the team this week. Undrafted free agent Jack Sanborn has played well with 10 tackles, an interception, and a fumble recovery.

The Browns have named Brissett their week one starter, which is interesting since they haven’t been giving him any snaps in the preseason. Brissett does have 37 starts over his six year career but he also only signed with Cleveland this offseason after spending 2021 with Miami.

Brissett may struggle in the preseason Bears at Browns contest against what should be a very good Chicago defense. The Bears have held Kansas City and Seattle to an average of 74 yards rushing, but their job also gets tougher if Nick Chubb and/or Kareem Hunt play at RB for Cleveland – which neither have so far.

It sounds like Brissett is only getting a few drives, so the bulk of the QB duties once again fall on Josh Dobbs and Josh Rosen. Both looked decent in the opener against Jacksonville, but were a combined 21/41 last week against the Eagles.

Hard not to go with the Bears here. They are playing their starters longer and one would think Eberflus would want to stay unbeaten as an NFL head coach preseason or not. When Chicago does go to their backups, Siemian has looked very comfortable running Luke Getsy’s offense.