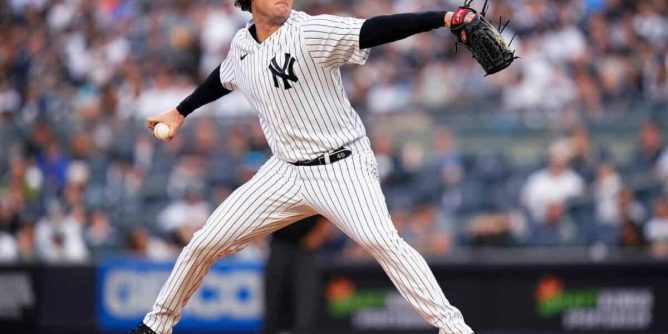 Divisional rivals the Tampa Bay Rays (36-30, 21-13 home) and the New York Yankees (49-17, 20-10 home) square off in game one of a three-game set beginning on Monday night in the Sunshine State. The two squads are already familiar with each other this season, with the Yankees holding a 5-2 head-to-head advantage.

The first pitch is scheduled for 7:10 p.m. EST inside Tropicana Field in St. Petersburg, Florida. New York is a -130 favorite, and the over-under total is 6.5 runs.

New York carries the best league in baseball into Monday’s contest, but a one-run defeat at the hands of the Toronto Blue Jays on Sunday snapped a nine-game winning steak. The Yankees own a sizeable 11-game advantage in a tough American League East division.

Staff ace Gerrit Cole (6-1, 3.33 ERA, 1.07 WHIP) is the probable starter for the visitors. Cole was torched for seven-earned runs over 2.1 innings earlier this month, but he put together a pair of shutout appearances before and after that outing. For the year, the 31-year-old has tossed 73.0 innings, surrendered 27 earned runs on 60 hits and 18 walks with 91 strikeouts.

New York’s offense is powered by the MLB home run leader Aaron Judge. The outfielder has 25 home runs already this season with 50 runs driven in. First baseman Anthony Rizzo is right behind him, with 18 dingers and 48 RBI.

The Yankees average 5.1 runs per game thanks to an offense that ranks tenth in the majors, hitting .248. New York’s pitching staff boasts an MLB-best 2.74 team earned run average.

What to Know – Tampa Bay Rays

The Rays hope to get back to winning ball games after suffering losses in five of their last six contests, including a three-game sweep at the hands of the Yankees early last week. Tampa Bay finds itself in third place in the AL East but trailing New York by 13 games.

On the hill for the hosts is projected to be lefty Shane McClanahan (7-3, 1.84 ERA, 0.86 WHIP). The young southpaw is putting together a fantastic season on the mound, leading the majors with 103 strikeouts. The 25-year-old has 78.1 innings pitched under his belt this year, allowing 16 earned runs on 52 hits and 15 walks.

The Rays’ offense doesn’t possess the firepower that their competition will send out, but Tampa Bay has a group of hitters that can get the job done. Outfielders Randy Arozarena and Kevin Kiermaier pace the Rays with seven home runs apiece, with first baseman Ji-Man Choi driving in a team-high 34 RBI over 47 games.

Tampa Bay hits .233 as a team, sitting 25th in the majors while scoring 4.0 runs per game. The Rays’ pitchers are fourth in the majors and third in the American League with a 3.16 team ERA.

McClanahan might own the pitching matchup against Cole. But the four-time all-star should have no problem mowing through the Rays lineup. It may take the Yankees some time to score some runs, but trust this offense to get the job done in the later innings.