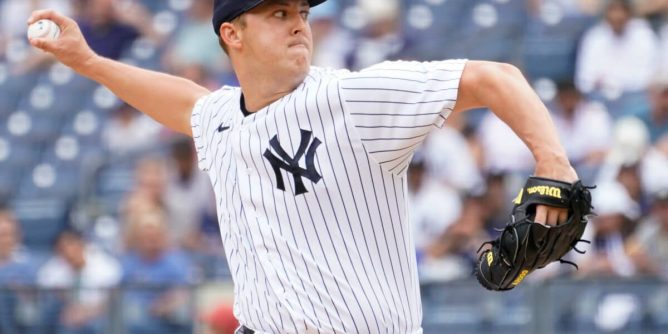 The New York Yankees (61-24, 27-15 away) and Boston Red Sox (46-39, 22-20 home) cap off their four-game series on Sunday night in front of a national audience on ESPN’s Sunday Night Baseball. New York took the first two games, and Boston bounced back on Saturday with a 6-5 victory.

The first pitch of Sunday night’s showdown is at 7 p.m. EST at Fenway Park in Boston, Massachusetts. New York is the betting favorite at -170, and the over-under total is nine runs.

New York sports the best record in baseball, and the Bronx Bombers have won six of their last ten contests. The Yankees own a 15-game lead for the top spot in the American League East in front of the Red Sox.

Right-hander Jameson Taillon (9-2, 3.63 ERA, 1.15 WHIP) is expected to take the mound for the Yankees. The former top prospect has found his grove this season in a tie for fourth for wins. The 30-year-old has 89.1 innings logged, surrendering 36 runs on 92 hits and 11 walks with 74 strikeouts.

Aaron Judge is making a case for AL Offensive MVP as we reach the midway point of the season. Judge leads the majors with 30 home runs and tied for fourth with 65 runs batted in. Anthony Rizzo (22 HRs) and Giancarlo Stanton (21 HRs) give the Yankees’ lineup three players in the top ten in home run totals.

The Yankees average a league-best 5.2 runs per game and rank 14th in the majors, hitting .244 for a team. New York has the AL’s best pitching staff with a 2.97 team earned run average.

What to Know – Boston Red Sox

The Red Sox might not catch the Yankees to take the division, but Boston is still in good shape midway through the season for a Wildcard playoff spot. Boston snapped a four-game losing skid with Saturday’s victory over New York.

Boston counters on the mound with righty Nick Pivetta (8-6, 3.68 ERA, 1.16 WHIP). Pivetta will try and bounce back Sunday night after serving up seven earned runs in his last outing. This season the 29-year-old has 100.1 innings under his belt, allowing 41 earned runs, 82 hits, 34 walks, and 95 strikeouts.

Trevor Story is projected to hit in over 100 runs for just the second time in his career. Story leads the Red Sox with 55 RBIs, while Rafael Devers is third in the MLB with a .327 batting average, 51 RBIs, and 59 runs scored.

The Red Sox have the best team batting average in baseball at .260 and score 4.7 runs per contest. Boston’s pitching staff sits 12th in the MLB behind a 3.78 team ERA.

One of the greatest rivalries in the MLB, the Yankees, and Red Sox conclude their four-game series Sunday night in Boston. These two teams will meet again in New York at the end of next week to close out the first half. Boston needs the victory, but the Yankees bounce back to spoil Boston’s last home game prior to the All-Star break.