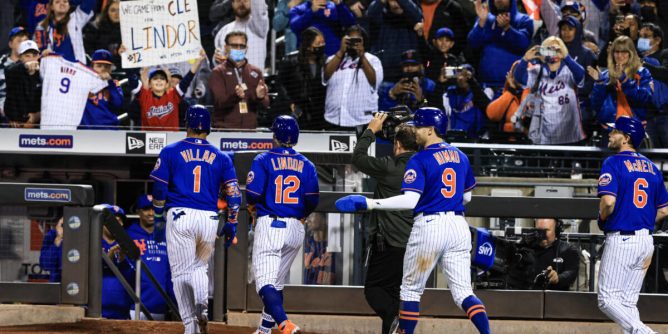 The New York Mets (3-1, 3-1 away) look to continue their solid start with game one of a three-game set against the Philadelphia Phillies (2-1, 2-1 home). New York opened the season, winning three of four against the Washington Nationals, while the Phillies took two of three from the Oakland Athletics.

The first pitch for Monday’s contest is at 6:45 p.m. EST at Citizens Bank Park in Philadelphia, PA. Philadelphia is favored on the moneyline (-160), and the over-under run total is 9.

What To Know – New York Mets

New York got off to the right start to begin the season, taking three of four from their NL East rival, Washington, on the road. The Mets were projected to finish second in the division behind this Philadelphia squad.

Taijuan Walker makes his season debut on the mound for the Mets. The 29-year old right-hander has been in the majors for ten seasons and second with New York. Last season Walker made 29 starts, finishing with a 7-11 record, 4.47 ERA, and 1.18 WHIP.

Outfielder Mark Canha is off to a hot start at the plate, hitting safely in seven of his first ten at-bats. First baseman Pete Alonso and outfielder Starling Marte have driven in four runs apiece through the first four games, with Alonso connected on his first of many home runs over the weekend. Utility man Jeff McNeil also had a strong opening series, hitting .438 (7-of-16) with a home run and three RBI.

What To Know – Philadelphia Phillies

The pre-season selection to win the NL East looked the part in the interleague opening series against the Athletics. Philadelphia could not close out the sweep, dropping Sunday’s series finale against Oakland.

Philadelphia’s offense belted five home runs in the opening series, led by second baseman Jean Segura with a pair of solo shots. Outfielder Nick Castellanos and first baseman Rhys Hoskins have driven in three runs apiece, while Kyle Schwarber swatted a long-ball in the opener. Those three have picked up the slack with All-Star outfielder Bryce Harper’s (1-for-11) and catcher J.T. Realmuto’s (1-for-9) sluggish starts at the dish.

The Pick Is In

The Mets and Phillies get together for the first of nineteen matchups between these two divisional foes this season. New York went 3-6 in Philly last year but averaged seven runs per game in the victories. The Mets hit well against lefties last year and have boosted their lineup even more, this year.

Walker will give the Mets his all on the mound with his spot in the rotation not guaranteed. Behind a strong outing from Walker and clutch hits from the offense, the Mets continue their hot start with another victory on the road.