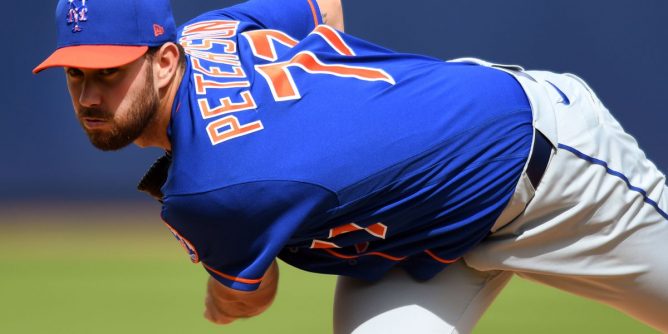 The first pitch of the series finale is at 6:40 p.m. EST at Great American Ball Park in Cincinnati, Ohio. The Mets are a road favorite at -170, and the over-under total is 9.5 runs.

What to Know – New York Mets

The Mets were shut out last night and hope to bounce back to win another series against a National League opponent. New York’s lead in the NL East has shrunk to only 2.5 games over the Atlanta Braves.

Left-hander David Peterson (5-1, 3.24 ERA, 1.20 WHIP) takes the ball for the visitors. The 26-year-old returns from paternity leave with a chance to win his third game in a row. Peterson has thrown 58.1 innings this year, giving up 21 earned runs on 48 hits and 22 walks with 60 strikeouts.

Pete Alonso continues to lead the majors with 69 runs batted in and is tied for fifth with 22 home runs. The bounce back at the plate from Francisco Lindor this season is what the Mets had hoped for. Lindor has 13 home runs, 53 RBI, and 48 runs scored.

New York hits .256 as a team, fourth in the majors, while averaging 4.7 runs per game. The pitching department for the Mets is 13th in the league with a 3.86 team earned run average.

What to Know – Cincinnati Reds

The expectations were low coming into the season for the Reds, but the front office probably didn’t anticipate Cincinnati would have one of the worst records in baseball. Cincinnati is in last place in the NL Central and 17.5 games back of the leading Milwaukee Brewers.

Looking to give the Reds their second win in a row and third in four games is right-hander Graham Ashcraft (4-2, 4.53 ERA, 1.24 WHIP). The rookie starter tries to bounce back after suffering his worst start of the season last week against the Cubs. The 24-year-old has made eight starts, logging 43.2 innings and allowing 22 earned runs on 45 hits and nine walks, with 28 strikeouts.

Bradon Drury has been the driver of the Reds’ offense this season, leading the team with 17 home runs, 45 RBIs, and 49 runs scored. Kyle Farmer has driven in 39 while Tommy Pham adds 11 home runs and 34 RBI.

The Reds are 19th in the MLB, sporting a .238 team batting average and scoring 4.3 runs per contest. Cincinnati pitching sits last in the league with a 5.45 team ERA.

The Mets haven’t dropped a series to an NL opponents since the beginning of June, and they aren’t going to end that streak now against one of the worst teams in the NL. New York races out early and never looks back.