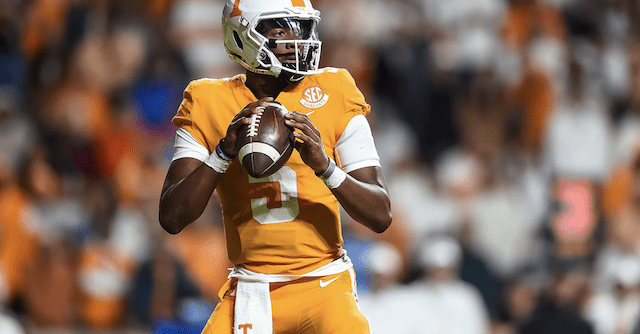 The Tennessee at Pittsburgh matchup for week two of the college football season has the potential to be the best one on the slate. Both teams have started the year with victories and have experienced QBs manning their respective offenses.

The Vols are actually -5.5 favorites on Saturday despite being ranked 24th while Pitt is 17th. The Panthers definitely have some value as +180 moneyline underdogs, while oddsmakers are also expecting some points with an O/U of 64.5. 56% of the betting public still likes Tennessee on the road.

You have to take the quality of competition into account a bit, but Tennessee looked pretty solid in last week’s 59-10 win over Ball State which covered the -37 point spread. QB Hendon Hooker was the star of week one, throwing for 221 yards and 2 TDs while running for two other scores to put his name right up there in early Heisman contention.

Tennessee was 7-6 last season, losing 48-45 to Purdue in the Music City Bowl to close out the year. Even that loss to the Boilermakers shows the type of potential the Vols offense has coming into 2022, as they were 16th in the country in total yards last year (459.0) and 9th in scoring (38.8).

Oddsmakers simply think that Pittsburgh’s defense is not up to the task on Saturday which is why they have made the Vols road favorites. while that may be the case, Tennessee’s defense has a much tougher test than last week and their secondary needs to be a bit better than they were in allowing 269 pass yards to Ball State QB John Paddock.

Pitt Tries for the Home Upset

Pittsburgh had an emotional week one win, beating former rival West Virginia 38-31 as -7.5 favorites in the first “Backyard Brawl” since 2011. Normally that would leave the Panthers in a letdown spot heading into the Tennessee at Pittsburgh matchup but at least the home squad has had a few extra days to prepare and reboot from last Thursday’s series opener.

One would think that Pittsburgh QB Kedon Slovis would only be better in his second game with the program. That’s lofty expectations for the USC transfer who threw for 308 yards and a TD to win the battle of former Trojan QBs against WVU’s J.T. Daniels in week one. With Tennessee’s defense being a little iffy in the secondary last week expect 300+ from Slovis yet again.

Pittsburgh’s defense gave up 31 points in week one, but they also had the play of the game with M.J. Devonshire’s 56 yard INT return TD with 2:58 left in the 4th that was the deciding factor. Hooker and the Vols offense are a challenge on Saturday, but Pitt was also #6 vs. the rush last season.

Oddsmakers aren’t taking home field advantage much into account in Saturday’s game which seems like a mistake. Hooker was great in week one for the Vols, but Slovis can go toe-to-toe with him from Pittsburgh’s side and the Panthers defense will be the X-factor in a game that seems like the wrong team is favored.