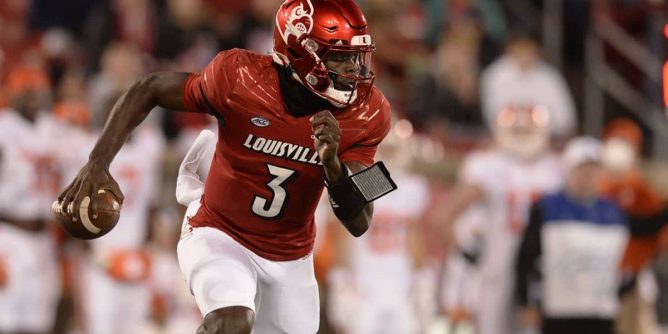 The Cardinals start the 2022 campaign as -4.5 road favorites in the week 1 Louisville at Syracuse matchup. That makes sense, UL was 6-7 a year ago and made their second bowl game in three seasons under Scott Satterfield, a 31-28 loss to Air Force in the First Responders Bowl.

The Orange did not make a bowl game in 2021, but their 5-7 mark was much improved from a 1-10 record in 2020. In a way last November’s 41-3 Louisville win over Syracuse as -3 point favorites was the game that determined which of these two teams made the postseason which could be a very similar situation in 2022 in the tough ACC.

Cunningham Putting Together a Heisman Resume?

Of course all eyes are on Cardinals’ QB Malik Cunningham in the week 1 Louisville at Cardinals matchup as he’s coming off a season in which he threw for 2,941 yards and 19 TDs while running for 1,030 and 20 more scores. Despite those remarkable numbers Cunningham wasn’t even top 10 in Heisman voting, mostly due to Louisville’s record which is why every win is important in 2022.

Cunningham dominated the Orange in last year’s 41-3 win to easily cover the -3 number at home. He had 4 TD passes and a TD run in the first half alone as the Cardinals were up 35-3 going into the break. This top 25 total yard offense from a year ago returns 7 starters and the Cardinals have averaged over 200 yards rushing in each of Satterfield’s first three seasons at the helm.

Louisville isn’t the only team that can run the ball in Saturday’s matchup as the Orange were a top 20 offense on the ground last year too. The Cardinals allowed Syracuse 138 yards on 39 carries in last year’s game, and gave up just 46 passing yards even though the Orange were down 4 TDs the whole second half.

Syracuse Has Some Intangibles

Sure the Orange got blown out in last year’s matchup, but that was at Cardinal Stadium and the Carrier Dome on a Saturday night provides a much different atmosphere. Syracuse has also won 7 of their last 8 season openers and should have some stability in coach Dino Babers’ 7th year with the team.

It’s no secret that Syracuse is going to try and run the ball against Louisville, mostly on the back of RB Sean Tucker who is now the school’s single season leading rusher after going for 1,496 yards last season. The Orange topped the ACC in rushing with 214.3 ypg and have eight players on their roster that have started a game at offensive line.

QB Garrett Shrader is no slouch running the football either, but in more of a brute force way than Cunningham is. Shrader’s 781 rush yards were the 4th most in the FBS and his 14 TDs were behind only Cunningham. Some balance would be nice though as Shrader threw for just 1,445 yards with 9 TDs and 4 INT.

Is location really that important in this matchup? Louisville absolutely dominated Syracuse in last year’s matchup that was over by halftime, with the Orange having no answer for Cunningham. 76% of the public likes the Cardinals and that seems to be the side to be on as Cunningham is just too good and Louisville returns a lot of starters from last year’s team.