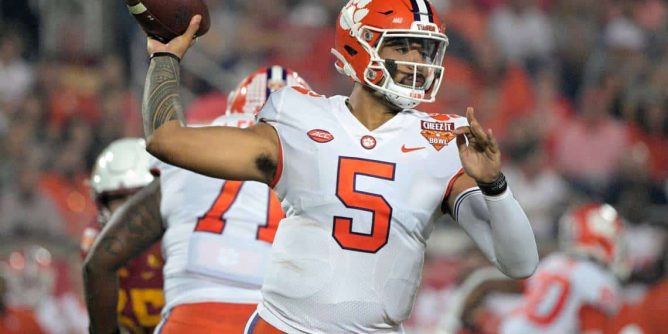 Despite some concerns with their offense the #4 Clemson Tigers come into Monday’s game with Georgia Tech as a -23.5 favorite. That spread is basically a coin flip on whether Tigers QB DJ Uiagalelei can bounce back from a 9TD / 10 INT season a year ago or if coach Dabo Swinney even goes to 5-star freshman recruit Cade Klubnik sooner rather than later.

Georgia Tech is a tough team to predict, as when we last saw them they were getting blown out by a combined 100-0 in their last two games against Notre Dame and Georgia. The Yellow Jackets also played Clemson tough last year though, losing just 14-8 on the road in week three to easily cover the +27.5 spread. 78% of the public like the Tigers to cover the number on Monday night (8:00 PM ET, ESPN).

While the QB situation at Clemson will be one to monitor all season, the thing is Uiagalelei (or whoever takes snaps) doesn’t have to be great, they just can’t be bad. That’s because the Tigers return seven starters to a defense that was 9th in the country in total yards allowed (309.3), 8th in rushing yards (100.2), and 2nd behind only Georgia in points allowed (15.0).

Clemson can easily win this game with their defense, but to cover the 23.5 points on Monday you’re going to need some offense as well. Uiagalelei is entering the rubber match of his career, looking like the next big thing when completing 66.7% of his passes in 2020 with 5 TD and 0 INT in relief of Trevor Lawrence but regressing to 9TD/10 INT and a 55.6% completion rate as the main man in 2021.

Clemson was 10-3 last season but that could have easily been a lot worse. They had single digit wins over Louisville, Syracuse, Boston College, and these Yellow Jackets. Uiagalelei had just 126 yards passing with 0TDs as Clemson barely escaped with the 14-8 win over GT last season.

The Yellow Jackets had their chances on the road against Clemson last season, going into the half 7-3 but never getting enough offense in failing to score a TD and falling 14-8. That was a great performance from the GT defense but that was short lived as they allowed 33+ points in 6 of the last 8 games of the year, and 40+ in 4 of the last 6.

The Tigers are a -3000 moneyline bet in the 9/5 Clemson vs Georgia Tech matchup so an outright upset by the Yellow Jackets is probably out of the question. GT can still keep this one close if they see some improvement from QB Jeff Sims who enters his sophomore campaign after playing in 18 games as a freshman (COVID eligible) the last two years.

Sims had 13 TDs and 13 INTs in 2020, but cut down on his mistakes last year for 12/7. His biggest asset against this Clemson defense could be his rushing capabilities as he has 864 yards and 10 TDs on the ground the past two seasons. Sims does have former Heisman Trophy winner Chris Weinke as his new QB coach, so last year’s #95 ranked passing offense can only be better.

23.5 seems like a lot of points for Clemson to be giving up in their season opener with some QB questions, but the even better number in this game is 51. It’s possible Georgia Tech doesn’t score against this vaunted Tigers defense which makes the under the way to go.