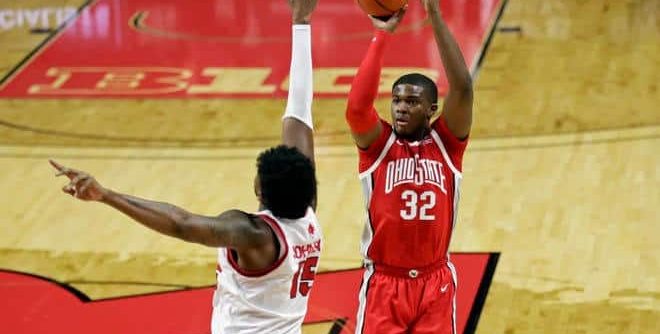 The Scarlet Knights put their impressive home record to the test in the February 9th Ohio State at Rutgers betting matchup. Rutgers is 11-2 at the RAC this season (Jersey Mike’s Arena) and have no problem facing a ranked team as they just dominated then #13 Michigan State 84-63 Saturday in New Jersey.

#16 Ohio State was well rested ahead of Saturday’s meeting with Maryland after Thursday night’s game with Iowa was cancelled due to inclement weather. It showed that the Buckeyes were fresh in an 82-67 victory over the Terrapins to even cover the -9.5 spread. Now OSU is a -3 favorite in a very tough place to play, even though Ohio State is just 3-4 on the road this season.

Can Ohio State’s Offense Get it Going?

The Buckeyes come into Wednesday night’s matchup boasting the #4 scoring offense in the Big Ten putting up 75.6 ppg. That’s what makes the February 9th Ohio State at Rutgers betting matchup so interesting – because Rutgers has the second best defense in the conference allowing a mere 64.8 ppg.

The Scarlet Knights stifled Michigan State on Saturday, going on a 15-3 run at one point in the second half and holding a 31-20 rebounding edge. Ohio State looked solid in their last game too though, scoring 75+ for the fourth straight time in the 15-point win over Maryland. EJ Liddell was a force in that game with 24 points/11 rebounds / 5 assists.

Liddell will look to have another solid game on Wednesday against a Rutgers defense that has struggled at time vs. the dominant big men of the conference. The Scarlet Knights allowed a 15 rebound game to Illinois’ Kofi Cockburn earlier in the season and gave up 26 points to Hunter Dickinson in early January. Liddell is averaging 22+ points and just under 10 rebounds over his last three games.

A lot of Rutgers’ success has to do with where they play, and the 8,000+ seat former Rutgers Athletic Center was rocking on Saturday in the rout over #13 Michigan State. Steve Pikiell’s team isn’t invincible at home as the losses to LaFayette and Maryland have come on their own court as a -19.5 and -3.5 favorite respectively.

Saturday’s win was a team effort with six Rutgers players scoring at least 11 points vs. the Spartans. Rutgers’ Paul Mulcahy is heating up with 46 total points the last two games, but it’s still the Scarlet Knights defense that is their calling card. Since a two-plus week layoff from December 12th to 30th, the Rutgers defense has also only allowed over 70 points to one opponent, a 79-78 loss at Northwestern in OT.

66% of public bettors like OSU on the road on Wednesday night, and they have won four straight in the series including a 79-68 victory last year in New Jersey as +3.5 underdogs.

Would Rutgers be in line for a letdown after their upset over #13 Michigan State on Saturday? Ohio State may also be looking ahead to a trip to Ann Arbor on Saturday which puts the edge back in the Scarlet Knights’ column.
Rutgers 67 – Ohio State 65