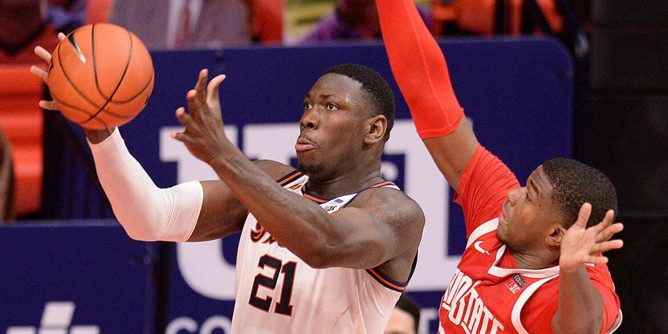 The Fighting Illini are back at home heading into the February 24th Ohio State at Illinois betting contest. Brad Underwood’s squad took their licks in a 70-59 loss at Rutgers (Scarlet Knights are 13-2 at home) but bounced back with a 79-74 win at Michigan State as -3 point favorites to sweep the season series against the Spartans.

At this point you almost feel bad for the Buckeyes, having to go to Illinois as part of a jam packed schedule due to making up some postponements. OSU was blown out 75-62 by Iowa on Saturday, had a quick turnaround and in OT at that in an 80-69 win against Indiana and now plays their fifth game in the last 12 days on Thursday.

The Buckeyes have a tough visit to Champaign on Thursday night, but this is a squad hat has been battling lately. OSU beat Michigan 68-57 as +3 point road underdogs on February 12th, covered a -12.5 spread in a victory over Minnesota (70-45), and outscored Indiana 17-6 in OT on Monday to battle back for an 80-69 win to resurrect and clear the -6.5 spread.

OSU is pretty much just unpredictable coming into the February 24th Ohio State at Illinois betting matchup, winning three of their last four but also suffering a devastating 13-point home loss to Iowa over that stretch. Ohio State has played at home the last three games, but now take their 4-5 road record to Champaign where the Illini are 11-2 on the year.

Ohio State succumbed to the Big Ten’s leading scorer Keegan Murray in the loss to Iowa, as he notched 24 points on 10-17 shooting. The Buckeyes did do a good job of holding Indiana’s Trayce Jackson-Davis to 13 points in Monday’s win over Indiana, but OSU has a huge challenge upcoming with Illinois’ 7′, 285 pound center Kofi Cockburn who has the size to also keep Ohio State’s leading scorer E.J. Liddell (19.5 ppg) in check.

The Fighting Illini have momentum following their 5-point win in East Lansing on Saturday. It was almost the perfect victory – avenged a loss at Rutgers the game prior, came out of the gates with a 34-22 halftime lead, and held off a red hot Spartans squad down the stretch (on the road) for the 74-69 win.

What Illinois has to do on Thursday night is avoid the letdown from the big win at Michigan State, which should be easier back at home for just the second time in the last six games. Besides being on their own court, having Kofi Cockburn also alleviates a lot of Illinois’ concerns on any given night. The big man went for 27 points and 9 rebounds vs. Michigan State, falling just a rebound shy of a school record 43rd double-double.

Besides the dominance of Cockburn, what makes Illinois such a good team is their depth. For example Jacob Grandison kind of came out of nowhere with 24 points to help get the win over Michigan State, while Trent Frazier went for 23 earlier this month against Indiana and Alfonso Plummer had 19 to fuel a recent win over Northwestern. This is a team that takes turns, but now Ohio State is going to be on the receiving end of that.
Illinois 73 – Ohio State 62