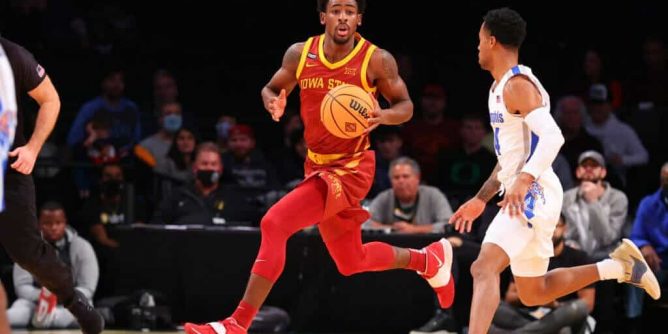 The NCAA Tournament Iowa State vs LSU matchup features a lot of unknowns for the simple fact that Louisiana State fired head coach Will Wade last week amid a slew of possible recruiting violations. the 22-11 Tigers will instead be coached by Kevin Nickelberry in the interim.

Iowa State would seem to have some value considering all the uncertainty’s surrounding the LSU program, but at the same time the last time the Cyclones were in action they were getting demoralized 72-41 by Texas Tech in the Big 12 Tournament. That was just two games after ISU was shut down 53-36 against Oklahoma State so this is a team with some real offensive issues right now.

Regardless of what happens in the NCAA Tournament Iowa State vs Louisiana State matchup, this season has been a success for the Cyclones under first year coach T.J. Otzelberger. After all this is an ISU that was just 2-22 last season, and then started off this year going 12-0 and got up to #8 in the country. Regardless of the moral victories, Iowa State is here so they might as well pick up their first victory in the NCAAs since 2017.

One things for certain and that’s Iowa State probably isn’t going to win being held to 41 points or less like they’ve done in two of their last three. That poor stretch is kind of dumbfounding considering Iowa State has some scorers led by Izaiah Brockington who puts up 17.3 ppg. Brockington’s slump has mirrored ISU’s though as he’s scored 17, 13, 11,and 7 points the last four games after a 35-point outing against West Virginia.

LSU Can Put It On Here

Louisiana State has to be licking their chops at the opportunity to face an Iowa State team that has looked like a deer in headlights lately. The Tigers have the type of defense that can make that misery continue, as they allowed the 30th fewest points per game (62.9) and were also 9th in opponent field goal percentage and 5th in opponent three point shooting.

LSU does have some coaching concerns with Nickelberry taking over for Wade, but defense travels well and the Tigers have some scorers as well. Tari Eason (16.9), Darius Days (13.6), Xavier Pinson (10.3), and Brandon Murray (10.1) all tally double figures for the Tigers.

LSU is a -4 point favorite which seems low but also there are a lot of questions with the Tigers having an interim coach. A slight 56% of the betting public are backing the Tigers in this one but it’s also hard to like ISU considering their recent offensive woes.

LSU’s defense is going to be the difference maker here, as they are 5th in the country in adjusted defensive efficiency up against an Iowa State offense averaging 48.3 ppg over their last three.  LSU got 25 votes to get into the top 25 in the final poll of the regular season, but they are also 19th in the KenPom rankings. That’s a team who is very underrated.
LSU 69 – Iowa State 57