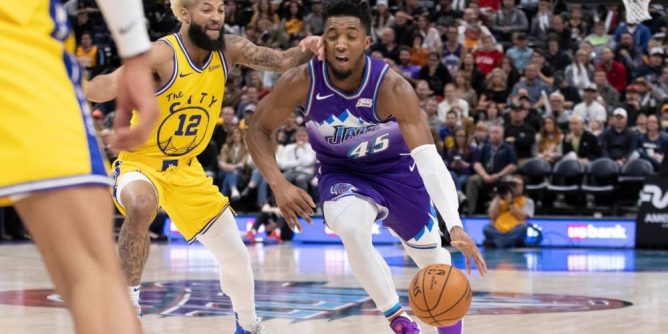 Utah had a pretty tough January going 4-12, but they were also fighting through a bevy of injuries. Now starting to get healthy, Donovan Mitchell and company have rattled off three straight wins heading into the February 9th Warriors at Jazz betting contest.

Even though the Jazz are 3-0 in February, they have a tough test on Wednesday night with the Warriors coming to town. Golden State has only played once in the last six games, and that was a relatively easy 110-98 victory over Oklahoma City on Monday. GSW is well rested coming into this game, but are still +2 point underdogs in Salt Lake City.

Golden State With Another Statement?

It seems like the Warriors live for these matchups against Western Conference high end competition, ending a long win streak from the Suns earlier this year while also taking down the Jazz 94-92 in late January.  Golden State should be extra amped up on Wednesday as underdogs visiting Salt Lake City.

Golden State will be without Klay Thompson in the February 9th Warriors at Jazz betting matchup as Steve Kerr is saving him for Thursday’s night visit from the Knicks. The rest of the available Warriors players should be pretty refreshed after playing just one game in the last six days, but Kevon Looney (quad) and Andre Iguodala (back) likely won’t be part of that.

Of course GSW will have Steph Curry available, but he’s been held to 20 points or less in five of his last seven games. The Warriors are 2-0 vs. Utah this season, and Curry has 13 and 28 points in those two games.

Warriors Seem to Have Turned Things Around

It was a brutal January for the Jazz but they’ve stayed afloat and at 33-21 are still in 4th place in the Western Conference. Utah is still 11 games back from Phoenix in the West and 8 down from Golden State, but the Jazz can close that gap a bit with a win in Wednesday night’s contest.

One of the big reasons for Utah’s 3-0 start to February is because Donovan Mitchell has returned from missing 8 games with a concussion. Mitchell scored 32 points in Monday’s 113-104 win over the Knicks to cover the -6.5 spread and had 27 in last Friday’s 23-point win over the Nets.

The Jazz are still without Rudy Gobert as he is likely out until after the all-star break with a calf injury. They like them big in Salt Lake City though as the Jazz are still throwing out a couple 7-footers in Udoka Azuibuike and Hassan Whiteside. That size could be a huge advantage on Wednesday facing a Golden State team that is still without Draymond Green, James Wiseman, and possibly Kevon Looney.

Golden State is 2-0 vs. Utah this season, including a 123-116 loss in Salt Lake City back on New Year’s Day as -5 point underdogs. Both teams are a bit thinner than they’d like heading into the third meeting of the season, but there still has to be some value on a Golden State team that is getting points even on a 9-game win streak. Over 75% of the public agrees with that which means it’s time to bank on the Jazz in this spot.
Jazz 113 – Warriors 107