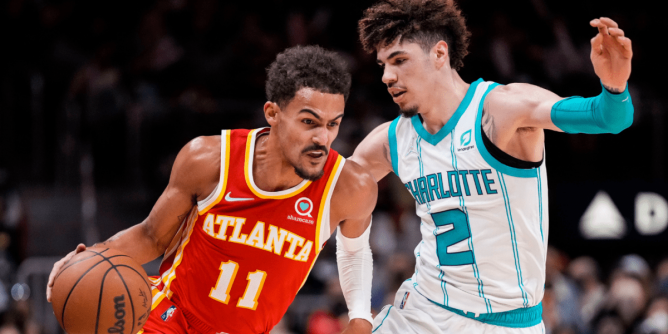 The combatants in Wednesday night’s play-in tip off are very evenly matched. Both Charlotte and Atlanta finished the season 43-39, and they’ve split their four game series this season. Trae Young and company did get home court due to a better divisional record which probably gives them an edge in the April 13th Hornets at Hawks betting contest.

Atlanta also has the experience factor, making it all the way to the Eastern Conference Finals last year before falling to the Bucks in 6. Charlotte won three games in a row to close out the season though, and hopefully learned something in a 144-117 beating at the hands of the Pacers in last year’s play-in tournament.

Can Hornets Get the Upset

Both of the home teams won in Tuesday night’s play-in games, and both the Barclays Center and the Target Center had a postseason atmosphere even this isn’t the “real playoffs” yet. That does up the degree of difficulty a bit for Charlotte in this matchup, but they do have a 130-127 victory in Atlanta back in December.

What everybody is looking for in the April 13th Hornets at Hawks betting contest is the matchup between LaMelo Ball and Trae Young. Ball has actually gotten the edge there, averaging 18/8/8 in five career games vs. Atlanta. Young meanwhile averages just 20 points in 12 career games vs. Charlotte.

There are plenty of x-factors in this game for both teams, and that definitely includes Terry Rozier of the Hornets. Rozier averaged 19.3 ppg on the season, but Miles Bridges also likes the trip to Atlanta with a 32 and a 35 point outing at the State Farm Center this season.

Hawks Have the Experience

Atlanta has been prone to get hot at this time of the year as evidenced by their unexpected run to the Eastern Conference Finals last season. History looks like it may be repeating itself, with the Hawks going 7-2 in their past 9 games.

The Hawks will still be without John Collins in the post for Wednesday’s game, which is unfortunate because Charlotte has arguably the worst interior defense in the league. That means Clint Capela must step up huge in this matchup as the Hornets allow 14/10 to opposing centers over the past 20 games. Capela averages 11.5 rebounds in his career against Charlotte and has at least a dozen in 8 of the last 9 head to head games.

Young is averaging 29.4 points and 11.2 assists over his last 10 games of the regular season, so he seems ready for the playoffs. De’Andre Hunter has scored 20+ in three straight contests vs. the Hornets, so he could provide some real scoring relief for Young here.

The side is a tough one to call in this game as it wouldn’t be a shock if the Hawks won by double digits or the Hornets pulled off the upset. Many people are expecting this game to be a matchup of high octane offenses, but in their four matchups during the regular season Charlotte’s 130-127 on December 5th was the only time either team broke 120 points.

Both play-in games on Tuesday went ‘under’ the betting total, which means postseason defenses seem alive and well.