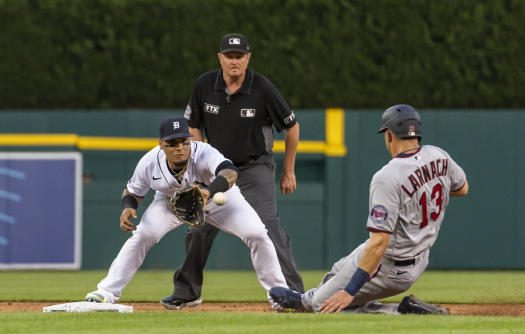 It hasn’t been a great trip to Detroit for Minnesota heading into the June 1st Twins at Tigers betting matchup. Rocco Baldelli’s squad lost the opener 7-5 on Monday as -138 favorites, and got a double header split with an 8-2 win (-142) and a 4-0 loss (-134). The Twins are down to -120 for Wednesday’s matchup.

The whole AL Central is in a rut lately, with the Tigers being the best team in the division over the last 10 games with a 6-4 record. Detroit is still 10 games back of the Twins in the division, but are chipping away still with two more games left in this 5-game series. The Tigers have their best pitcher on the bump Wednesday and have some value at +100 here.

Tale of Two Offenses for Minnesota

It was an interesting doubleheader for the Twins on Tuesday, getting a Gary Sanchez HR and a 3-4 day from Max Kepler en route to scoring 8 runs in the opener, but being held to 3 hits in the 4-0 loss in the nightcap.

It may be another night of struggles at the plate for Minnesota in the June 1st Twins at Tigers betting matchup. That’s because they are up against Tarik Skubal who has held opponents scoreless in three of his last four starts. Byron Buxton was 2-9 in the double header, but is 2-6 with 2 HRs in his career vs. Skubal.

Minnesota counters with Bailey Ober (1-1, 3.25 ERA) in Wednesday’s pitching matchup. The right-hander is making his second start against Detroit in 2022, giving up 1 ER but over just 3.2 IP on April 28th in a 7-1 Twins win. Minnesota used just 4 relievers in the double header on Tuesday, so the fact that Ober hasn’t thrown more than 80 pitches in a game this season shouldn’t be a huge concern.

The Tigers offense didn’t do a whole lot in the 4-0 win that was the second game of the double header, managing just 5 hits. Former Twin Jonathan Schoop was all Detroit needed though, as he was 2-4 with a HR while driving in all four runs. Schoop is one of six Tigers batters hitting better than .300 on their current home stand.

Detroit is a home underdog despite having the advantage in the pitching matchup. That’s somewhat strange especially with the Tigers taking the first two of three in this series . Minnesota still owns the season series 6-3, but Detroit gets closer to evening things up here.