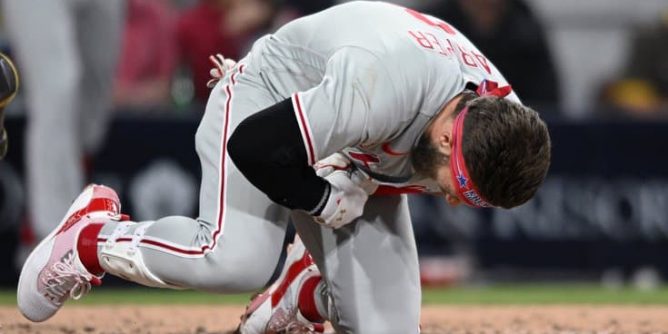 Atlanta and Philadelphia have to be thinking about what more they have to do heading into the June 28th Braves at Phillies betting matchup. Atlanta has gone 19-5 in June and still find themselves 5 GB from the Mets in the NL East. The Phillies are 18-6 this month and are 8 back in the division.

Both teams had Monday off, but that’s not nearly enough time for Bryce Harper to get back in the lineup. Harper could be out until late August after suffering a broken thumb in Saturday night’s 4-2 win in San Diego. Despite the injury, the Phillies are still -120 favorites for the series opener with Atlanta looking like they have some value at +102.

Braves Go On the Road

Atlanta just wrapped up a 4-3 home stand that culminated in dropping two of three against the Dodgers. The Braves swept the Nationals the last time they were on the road, but then lost two of three to the Cubs at Wrigley Field which snapped their 14-game win streak. Atlanta is still 9-2 in their last 11 away from Truist Park.

Charlie Morton (4-3, 4.84) gets the start in the June 28th Braves at Phillies betting matchup. The right-hander has allowed just 3 hits in each of his last two starts, but one of those ended up being a 1-0 Atlanta loss to the Cubs. The right-hander has a 5.63 ERA in 7 road starts compared to 4.00 in the same amount of outings at home.

The Braves have value at +102 on Tuesday night for the simple fact that Dansby Swanson continues to stay hot. He’s got 4 HR in the last 5 games and is hitting .409 over the past week. Combined with catcher Travis d’Arnaud who is 6 for his last 13 (.462) the Atlanta offense has some potential here – even if Ronald Acuna, Jr. remains out with a foot injury.

Who Will Step Up in Place of Harper?

The Phillies depth will be put to the test a bit in light of Harper being out indefinitely with a thumb injury, but at the same time he has missed double digit games with various ailments this season. Jean Segura also missed the whole month of June with a fractured finger (and is likely out until August) so the digits have not been kind to Philadelphia this season.

The Phillies still have a potent offense led by Kyle Schwarber who has hit 3 HRs in his last five games. That being said not having Harper is going to make it harder to work through the slumps that Rhys Hoskins (.167) and J.T. Realmuto (.133) are going through over the past week.

Zack Wheeler (6-4, 2.77 ERA) being up in the rotation is the biggest reason that the Phillies are favored on Tuesday night. He’s allowed 2 ER or less in 9 of his last 10 starts and struck out 10 Atlanta batters in a 7-3 Phillies win at the end of May as -122 road favorites.

About 66% of the betting public is on Atlanta in this matchup, and they do have a nice price tag as road underdogs considering they’ve won 9 of their last 11 away games. It’s just hard to go against Wheeler though, and -120 is the lowest we’ve seen him in his last 8 starts.