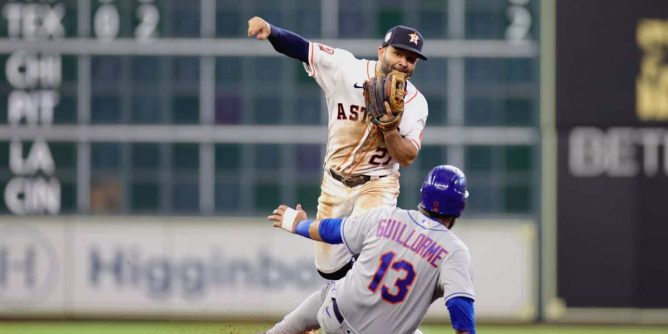 Houston continues their visit to the Big Apple heading into the June 28th Astros at Mets betting matchup. The Astros split a 4-game series with the Yankees over the weekend, and now have a little two-game set with the Mets at Citi Field.

Houston had an interesting series with the Yankees, which includes a no-hitter win on Saturday that was the first time the Yankees hadn’t gotten a hit in a game in 19 years. The Astros also had a 3-0 win on Friday and went into the 10th inning tied on Sunday before an Aaron Judge walkoff gave the Yankees a 6-3 victory.

The Yankees have the #1 scoring offense in baseball, but things don’t get any easier for the Houston pitching staff in the June 28th Astros at Mets betting matchup. The Mets are 3rd in MLB in scoring, so Luis Garcia (5-5, 3.68 ERA) has a test on Tuesday. Garcia pitched against the Mets last week, allowing 3ER over 5.0 IP in a 5-3 Houston win as -133 favorites.

The Astros have found their power at the plate recently, with Jose Altuve homering in two straight games while Alex Bregman and Yordan Alvarez have both gone deep multiple times over the past five games. Bregman has a .545 OBP in the past week.

New York has some value at +102 on Tuesday night not just because they are back at home, but also because they are coming off a 3-2 loss. to the Marlins The Mets have done a great job of avoiding losing streaks, going 22-5 in their last 27 following a loss.

New York is also 26-7 in their last 33 following an off day and 20-6 in their last 26 in game one of a series so the trends are in their favor. Jeff McNeil (hamstring) could also be returning to the lineup for the first time in over a week while Brandon Nimmo (.438) and Francisco Lindor (.375) are both hitting well over the past week.

Carlos Carrasco (8-3, 4.42 ERA) makes his second straight start vs. the Astros and hoping for much better results than last Wednesday. The right-hander gave up one HR to Bregman and two to Alvarez as his night was done after just 2.1 IP. That also makes three times in his last six starts that Carrasco has allowed 5 runs.

Houston is on the road but they’ve also been in New York since last week and had an off day on Monday. The Astros crushed Carrasco last week, so -124 isn’t a bad price for the visitors. That being said the Mets just don’t lose two in a row, and they’re also 14 games above .500 playing at home this season.