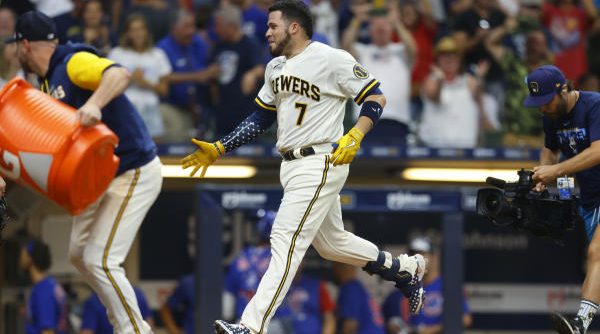 Monday’s series opener between Chicago and Milwaukee had it all – and that was just in the last two innings. Seiya Suzuki hit an inside the park home run off Josh Hader to give the visitors a 2-1 lead before Victor Caratini hit a three run walkoff in the bottom of the inning against his former team to give the Brewers a 5-2 win as -129 favorites.

What will we see for an encore in the July 5th Cubs at Brewers betting matchup? Milwaukee is a -130 favorite behind rookie starter Jason Alexander up against Chicago’s (+110) tried and true Kyle Hendricks making his 31st career appearance against the Brewers.

Cubs Let One Get Away

Chicago had their chances on Monday for sure. The Cubs took a 2-1 lead in the top of the 9th as Suzuki hit an inside the park home run off one of the best closers in the game. They then walked in a run in the bottom of the frame and failed to put the ball in play in the top of the 10th even after loading the bases with 1-out.

If you give the first place Brewers as many chances as the Cubs did in the opener they’ll eventually take the win. With Monday’s loss Chicago is now 5-6 against Milwaukee this season, which actually isn’t bad compared to their 4-15 head to head mark a year ago. The Cubs are now just 2-9 in the last 11 in Milwaukee however.

Brewers Putting It Together

A win is a win in the MLB, and Milwaukee will take Monday’s victory even if it was ugly at times. Caratini was 0-4 with 4K’s in the game prior to delivering the huge blow in the bottom of the 10th but both teams had a case of the whiffs with a combined 19 SOs.

The Brewers have now won four of their last five home games, and Monday’s contest got them back on track after managing just a four game split in Pittsburgh over the weekend. One of those contests vs. the Bucs was a 19-2 win and another was a 7-8 loss so at least the Milwaukee offense continues to produce.

The rookie Alexander (2-0, 3.82 ERA) went against the Cubs in his MLB debut on June giving up just 2 ER over 7.0 IP in a 4-3 Milwaukee loss at Wrigley Field. Alexander has made his last two appearances out of the bullpen, with Craig Counsell not liking what he saw after the right-hander allowed 4 ER over 5.2 IP to the Cardinals on June 24th. An Adrian Houser elbow injury has him back in the rotation however.

A whopping 77% of the betting public like the home team in the July 5th Cubs at Brewers betting pick. -130 is not a bad price considering Milwaukee has won 9 of the last 11 head to head games at American Family Field, in fact that price kind of raises some concerns.

Hendricks had some issues in his last appearance in Milwaukee, but was really good in his last road outing in St. Louis. The Cubs aren’t playing bad having won three straight series, including at St. Louis and against Boston over the weekend. Chicago is the play.