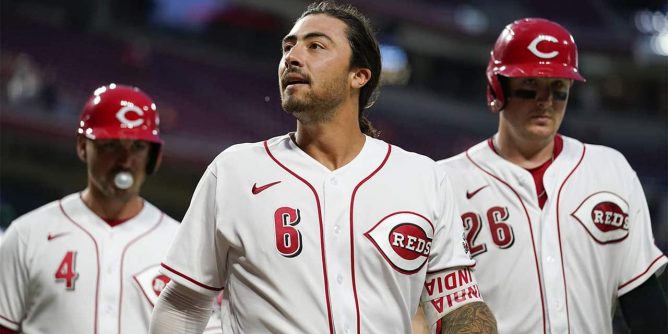 Miami has the #24 ranked scoring offense in MLB (4.03 runs/game) but they’re playing even worse than that lately. The Marlins tallied just a single run in getting swept by the Phillies in a three game series prior to the All-Star game and have already been shut out twice in five games since the break.

Those struggles at the plate definitely give Cincinnati some value in the July 26th Marlins at Reds betting matchup. That’s especially true since the Reds put together a dominating 11-2 win on Monday night as -128 favorites. The Reds are actually -104 in game two, with Miami being the slight favorite at -112.

Miami has had some stinkers at the plate lately, but at the very least they’ve been able to bounce back following a loss over the past week. The Marlins lost 8-0 in a one game set with the Rangers last Thursday, but followed that up with an 8-1 win over the Pirates. After another 1-0 loss to Pittsburgh, Miami got the Sunday win 6-5.

Can Miami get another bounce back win or was their series victory over the weekend just a byproduct of playing Pittsburgh? The Reds are now 3-1 from the break, taking two of three from the visiting Cardinals in their last series. The line of MIA -112 would seem to point towards the Marlins, who were +119 in Monday’s loss.

Is Pablo Lopez (6-5, 3.14 ERA) the reason Miami is the favorite in the July 26th Marlins at Reds betting matchup? Lopez has 5ER allowed performances in two of his last four starts, but also has given up just 2 ER over 10.0 IP in his other two outings over that span.

Monday’s 11-run output was still only the fourth most runs the Reds have scored this season. They’ve gone 2-1 in the game following their other high scoring outputs, so it’s not impossible to think they put together another good showing on Tuesday night – even if it’s not 11 runs and 16 hits.

Jonathan India had 3 hits and his first career grand slam to fuel Monday night’s win. India now has three HRs in his last four games and a .500 OBP in his last three. Donovan Solano also had a three hit game in the series opener and was 3-4 on Saturday vs. the Cardinals so he is dialed in right now as well.

Rookie Nick Lodolo had the best start of his young career on Monday, throwing 6.0 IP of shutout ball with 9 K’s. Fellow first year player Hunter Greene (3-10, 5.70 ERA) hopes for similar results as he takes the mound Tuesday night. Green has had a rough month though, going 0-2 with a 6.06 ERA in three July starts.

Cincinnati looked good on Monday but just 46% of the public like the Reds to get a second straight win over Miami. The Marlins seem to have the pitching advantage with Lopez on the mound, but he’s also inconsistent. If it’s a good outing, the Marlins win – and that’s worth a roll of the dice.