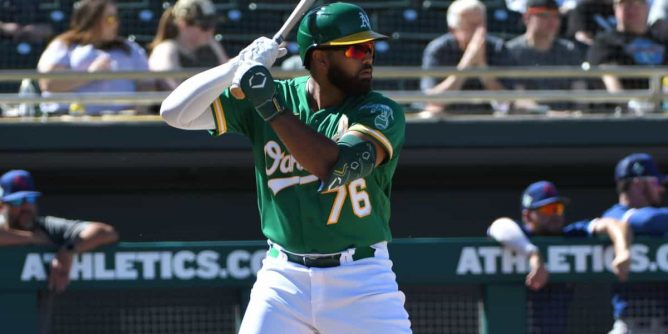 Thursday’s MLB slate features a couple solid matchups like 1st place teams colliding when the Dodgers wrap up their series with the Mets or two postseason contenders meeting up with the Guardians at the Orioles. The September 1st A’s at Nationals game is not one of those – as both teams are mired in last place in their respective divisions.

Just because these two teams have the fewest wins in baseball doesn’t mean there isn’t intrigue to this game, starting with a line that is very even with Washington at -116 and the A’s -102. We will also see the debut of Oakland pitcher Ken Waldichuk while the Nationals try to win consecutive home games for the first time since the end of June. 61% of the public are on Oakland in this gambler’s delight of a game.

It doesn’t take much for the A’s to play ‘better’ considering they are 49-82 on the season, but Oakland recently wrapped up a 5-5 home stand with four of those wins coming against Seattle and the Yankees – likely playoff teams. The Athletics also won the series opener in Washington  10-6 before having their three game win streak snapped with a 5-1 defeat on Wednesday.

Oakland’s offense was alive on Tuesday with 13 hits, as Tony Kemp and Sean Murphy both had 3-hit nights. Murphy added a HR and finished the night with 5 RBI while Dermis Garcia hit his first MLB long ball. Garcia also had a HR on Wednesday but it was the A’s lone run.

Oakland gets their first chance to see Waldichuk in the September 1st A’s at Nationals matchup, the left-hander that came over from the Yankees in the Frankie Montas trade. Waldichuk is considered the A’s third best prospect and has posted a 3.38 ERA at Triple A Las Vegas.

The Nationals won consecutive games just once during the month of August, taking two in San Diego on the 18th-19th. Washington finished last month 9-18, which was slightly better than their 6-19 mark in July. The last time the Nats’ won back-to-back games at home was June 27th-28th against the Pirates.

Washington has scored 11 runs this series and gets to face a pitcher making his MLB debut. Joey Meneses had a 3-hit game on Tuesday while Lane Thomas and Luis Garcia hit HRs but the Nationals couldn’t get past their pitcher Erick Fedde giving up 6ER over 2.2 IP. Luke Voit homered and C.J. Abrams scored two runs to power Wednesday’s win.

Anibal Sanchez picked up the win for Washington on Wednesday with 1 ER allowed over 7.0 IP, his first W since September of 2020. Paolo Espino (0-6, 4.35 ERA) tries to break into the win column himself and improve on the 5.92 ERA he posted in August.

Do we go with the unknown of Waldichuk here or the known of Espino (which hasn’t been great lately)? The Nationals offense has had a good series despite splitting the first two games, and Espino has allowed at least 3 runs in 5 of his last 6 starts. Have to play the total here.