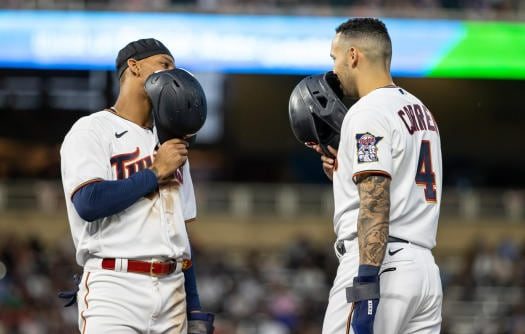 It’s been a tale of two offenses for New York heading into the June 9th Yankees at Twins betting matchup. The Yankees belted out 14 hits including three HRs in Tuesday’s 10-4 win as -169 favorites, but clammed up in Wednesday’s 8-1 defeat to fall with a -181 price tag.

Minnesota would seem to be up against it as this series wraps up with the Yankees send Gerrit Cole to the bumps. That was also supposed to be the case on Tuesday against Nestor Cortes as well though, and the Twins ended up getting to one of the Cy Young favorites for 4ER over 4.1 IP as Minnesota cashed at +165. The Yankees have their highest price of the series on Wednesday, all the way up to -198.

Minnesota doesn’t have much of a chance in the June 9th Yankees at Twins betting matchup if Cole (5-1, 2.78 ERA) was dealing like he was last time out. The New York pitcher retired the first 20 Detroit batters he faced en route to 7.0 IP of 2-hit ball in a 13-0 Yankees win as whopping -327 favorites.

Cole seems dialed in as he has now thrown a 2-hitter in two straight starts and has struck out 30 total batters in his last three starts. Cole is 3-0 with a 2.67 ERA in five road starts this season and made two starts against Minnesota in 2021, giving up 2 ER over 6.0 IP at Target Field a year ago to the day. He also didn’t allow a run over 6.0 IP back in New York in August, both Yankees wins.

Cole should keep the Twins at Bay for 6-7 innings on Thursday, but what is to be expected from the New York offense? Anthony Rizzo, Aaron Judge, and Giancarlo Stanton all went deep in Tuesday’s win but the team managed just 4 hits on Wednesday.

Twins Try to Take the Series

Minnesota has bounced back nicely from losing four of five in Detroit, taking two of three in Toronto and with an outside chance at another series win from an AL East team in Thursday’s battle with the Yankees. The Twins had 12 hits on Tuesday despite the loss, and followed that up with 11 on Wednesday so this is an offense that is feeling it right now.

It’s no easy task to get to Cole on Thursday, but Yankees pitcher Nestor Cortes had a string of 19 straight starts allowing 3ER or less snapped in Minnesota’s win on Wednesday. Byron Buxton and Ryan Jeffers hit 5th inning solo shots to chase Cortes after his second shortest outing of the season.

Chris Archer held the Yankees’ #6 scoring offense in MLB to just 2 hits over 5.0 IP on Wednesday, something Dylan Bundy (3-3, 5.37 ERA) will try to repeat in the series finale. Bundy has allowed at least 4 ER in four of his last six starts though., and he’s given up 3 HR to Judge in 19 career ABs.

New York is 56 games into the season and the Yankees (40-16) have had just three losing streaks all year. Wednesday’s defeat snapped a 7-game NYY winning streak, and they’ll want to get back on track in this matchup. Bundy has had outings of 5, 4, 9, and 6 runs allowed over his last six starts so this one could go the Yankees’ way big time.