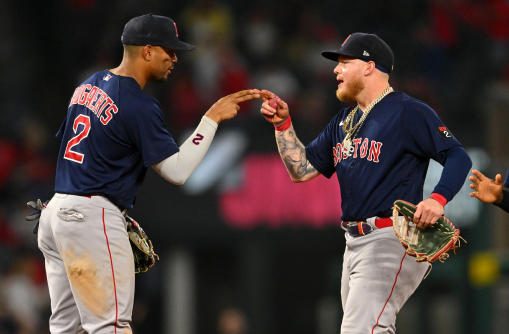 Streaks are on the line in the June 9th Red Sox at Angels betting matchup. Los Angeles is in the midst of a stretch they’d rather forget, as their losing streak has reached 14 games and has even cost manager Joe Maddon his job. Boston is going the other way, winning their last seven.

Even after replacing Maddon with Phil Nevin on the interim, it has failed to spark the Angels as they’ve dropped the last two under their new skipper as the Red Sox look on the verge of a four game series sweep. That being said and even with everything working against them, oddsmakers have the Angels as -120 favorites as these two teams wrap up their visit.

Boston In the Groove

It’s positive – but also unfortunate – that Boston is on a seven game win streak but are still 10.5 GB of the Yankees in another competitive season in the AL East. At least the Red Sox have climbed above .500 (30-27) and there’s a lot of baseball yet to be played at the very least in the hopes of a wild card berth.

The Red Sox would love a second straight series sweep of an AL West opponent after taking three from Oakland over the weekend by a combined margin of 20-4. What’s somewhat wild about Boston’s 6-0 road swing so far is that nobody is exceptionally hot at the plate. Rafael Devers (.350), Alex Verdugo (.333), and JD Martinez (.300) are hitting well over the past week, but nothing outrageous – plus the team only has 3 total HRs over that span.

Boston has already collected two 1-0 wins this series, so it’s hit or miss what kind of run support Nick Pivetta (5-4, 3.50 ERA) gets in the June 9th Red Sox at Angels betting contest. The good news is that the right-hander hasn’t needed much backup lately, holding opponents to an ER or less in 5 of his last 6 starts. which is a pretty impressive stretch.

Angels Have Been Close

It was a 1-0 loss in the series opener that cost Maddon his job, but the Angels also fell 1-0 again on Wednesday night as the Red Sox got the win as -151 favorites. That defeat pushed the losing streak to 14 games, including 8 straight at home.

Even despite Tuesday’s 6-5 loss, this is an Angels team that simply isn’t hitting right now. LAA has been held to 2 runs or less in 7 of their last 9 games, numbers that don’t look like they’ll improve with Mike Trout in danger of missing a second straight game with a groin injury.

This game really circles back to the question of why the Angels are -120 favorites (BOS +100) on Thursday night – is this an obvious trap? Shohei Ohtani (3-4, 3.99 ERA) is on the hill for Los Angeles but they’ve already lost in two of his starts during the streak as he’s given up 9 ER in 9 IP in defeats to the Blue Jays and Yankees.

Boston is in the midst of a 7-game win streak, the Angels have dropped 14 in a row – and yet Los Angeles is favored. The line is saying that Los Angeles pulls this one out.