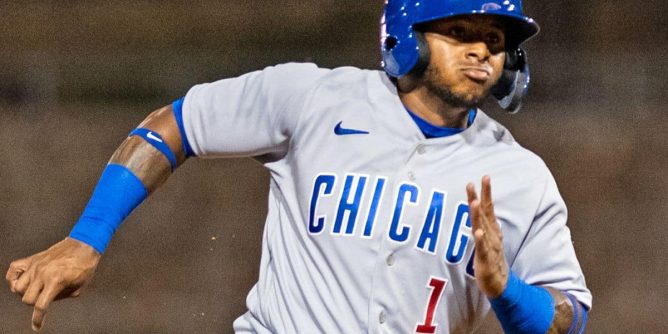 Even with every game being an emotional one because of the supposed impending trades of Willson Contreras and Ian Happ, Chicago has persevered to put together a six game win streak. At 40-57 and 17 games back from Milwaukee in the NL Central the Cubs are still going to be sellers at next week’s deadline, but they’re also dangerous right now.

The Giants are heading in the opposite direction as the Cubs, losers of their last seven. San Francisco just got swept in Arizona to finish an 0-7 road trip to start the second half, but are back home where they are 5-1 the last 6 games. SF is a -146 favorite in Thursday’s series opener.

Cubs Putting It Together

Chicago is 5-0 since the All-Star break a huge change from the 9-game losing streak they had put together before a 3-2 win over the Mets on the final Sunday of the first half. Have the Cubs turned things around, or are they just on a lucky streak fueled by trade rumors of two more fan favorites?

While Happ and Contreras could soon be on the move, young Chicago players are proving that they are ready to lead the next generation in the Windy City. Nelson Velazquez has 3HR and a .667 OBP in his last four games while Christopher Morel continues to be a revelation with a .417 average over his last five. Yan Gomes also has 2 HR in his last 8 AB.

The Cubs send Justin Steele (4-6, 4.02 ERA) to the mound on Thursday night in a battle of left-handers. Steele has allowed an ER or less in three of his last four starts and Cubs starters have given up just 13 total runs during their six game win streak.

Can Giants Get Back on Track at Home

San Francisco is back home after losing four straight to the Dodgers -which was expected – but also three more this week in Arizona. That stretch includes a 7-3 loss to the Diamondbacks on Tuesday when SF was a -179 underdog.

The Giants have been better at home lately, going 5-1 over their last six at Oracle Park. San Francisco has also won six of the last seven against the Cubs and are 9-4 against Chicago in the last 13 head to head meetings in the Bay.

The big question is if SF can get their bats going in the July 28th Cubs at Giants betting matchup? They’ve scored 3 runs or less in five of the last six games and have hit just 2 HRs since returning from the All-Star break.

Thursday’s starter Alex Wood (6-7, 4.43 ERA) knows all about the Giants lack of offense recently. San Francisco is just 2-2 in Wood starts this month despite him posting a 1.31 ERA in July.

These two teams are headed in opposite directions, yet it’s the cold team the Giants that are the favorites on Thursday. 65% of the betting public is on San Francisco back at home, but what this game looks like it will be is a low scoring one. Wood has been dialed in this month and Chicago starters are getting it done as well.