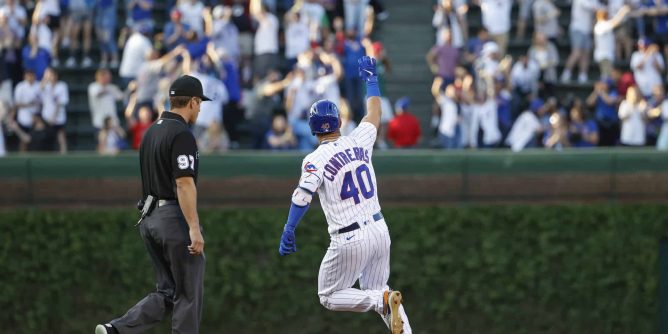 New York has alternated wins and losses coming into the July 14th Mets at Cubs betting preview, which isn’t a great trend considering they are coming off a 7-3 win over the Braves on Wednesday. The Mets still seem to have a great price at -130 as they try to hold on to a 2.5 game lead over Atlanta in the NL East.

The Cubs had been playing better lately with wins in four straight series, but they’ve been swept by the Dodgers and Orioles for a six game losing streak and a 2-8 mark over their last 10. Chicago is just +108 on Thursday night however – do oddsmakers believe they have the pitching edge?

Mets Try to Break the Trend

New York has followed a solid offensive performance with a dud at the plate scoring 10,2,5,0,4,1, and 7 runs over their last seven games. With HRs from Francisco Lindor, Mark Canha, and Eduardo Escobar in Wednesday’s 7-3 victory over the Braves, New York is trending towards a letdown in the July 14th Mets at Cubs betting matchup.

This will be the first series of 2022 between these two teams with the Cubs actually holding a 4-3 edge a year ago. The Mets are 27-19 on the road this season and getting continued power from Lindor (3 HR last 6 games) would help them improve on that mark. Lindor is one of just four Mets batters hitting above .200 over the past week though.

The Cubs have lost six in a row, but to the Dodgers and Orioles who have combined to win 18 of their last 20 games. It’s not like the Mets visiting Wrigley Field will be a relief, but at least New York is ‘only’ 6-4 over their last 10.

Chicago needs to get back on track here and build off the success of taking two of three against the Cardinals, Reds, Red Sox, and Brewers over the course of four straight series’. Much like the Mets though, the Cubs only have two players hitting above .250 over the past week, Nico Hoerner (.333) and David Bote who is 4 for his last 7.

Keegan Thompson (7-3, 3.16 ERA) will try to be the stopper on Thursday to get the Cubs back in the win column. He’s coming off 5.2 IP of 2-hit ball against the Dodgers in a game L.A. eventually won 4-3. Chicago has lost 5 of the last 7 Thompson starts.

This seems like an easy play on the Mets, although they are due for a loss in the alternating W/L trend. The Cubs are in a skid – but also against some red hot teams and New York is a 1st place squad themselves. It’s best not to overthink this one and side with 77% of the betting public who is on New York.