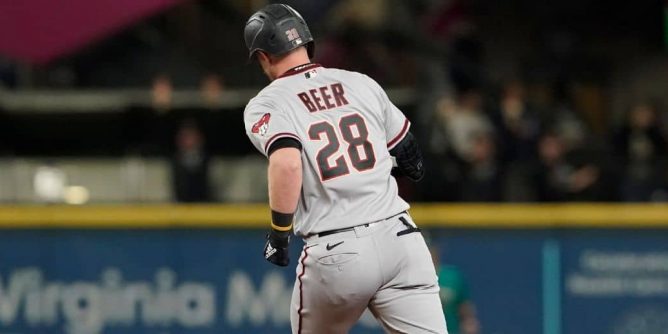 There looks to be some good value on the home team heading into the April 21st Diamondbacks at Nationals betting contest. Sure Washington lost 11-2 on Wednesday, but they have a chance of taking three out of four with a win in Thursday’s series finale.

Arizona’s 11-2 win on Wednesday was their best offensive output of the season, but it was also just their first road victory of the season (1-4). The Nationals are likely without their best hitter Josh Bell in the series wrap-up, but are still -130 favorites as oddsmakers don’t believe the Diamondbacks are out of their early offensive struggles. The D’Backs cashed in at +105 on Wednesday, but are +110 in this spot.

Arizona Have any Runs Left?

The Diamondbacks blew up for a season high in runs (11) and hits (10) in Wednesday’s win but that has definitely not been the norm this season. The big outing allowed Arizona to pull out of last place in the majors in runs (2.75) and OPS (.563) but they still have the league’s worst team batting average at just .168.

Even if it’s not their usual offensive output, Wednesday’s big outing forced Washington to burn up six relievers after starter Erick Fedde was bounced after 3.1 IP. Seth Beer had 3 hits and 3 RBI while Daulton Varsho added a HR and also knocked in 3 RBI. Beer is the only Arizona hitter with an OBP above .350 on the season (.486).

Merrill Kelly was great on Wednesday with 6.0 IP of 1 ER ball. Zach Davies (0-1, 5.79 ERA) will try to follow that up in his third start of the year. Davis had some struggles last year with the Cubs going 6-12 with a career high 5.78 ERA, but he looked good in his Arizona debut allowing just 2 ER over 5.0 IP. Things didn’t go as well last time out, with Davies allowing 4 ER in 4.1 IP taking the loss against the Mets.

Washington had some momentum going following a 6-1 and 1-0 doubleheader sweep on Tuesday, but that did not carry over in Wednesday’s big blowout loss. Juan Soto was 2-3 and Nelson Cruz knocked in one of the two runs on Wednesday but otherwise there wasn’t much doing for the Nationals offense.

Josh Bell hit a double in his only AB during the 11-2 loss, but he left the game at the end of the 3rd with knee soreness and he’ll be out for some time. Bell may not be missed in the April 21st Diamondbacks at Nationals betting matchup considering he is 2-18 (.111) in his career vs. Davies. Maikel Franco has had some success against the Arizona starter, going 4-8 with a HR and 4 RBI.

The Nationals need a long outing from Josh Rogers (1-1, 3.72 ERA) after using up so much of the bullpen in game three. He’s been solid with 4 ER over 9.2 IP this season and has pitched into at least the 5th in both of his starts.

Despite looking very good on Wednesday, Arizona is just 1-4 on the road this season. Bell is out, but the Nationals still have more firepower on offense than the Diamondbacks, especially against Davies who is not out of the woods yet after his struggles last season.