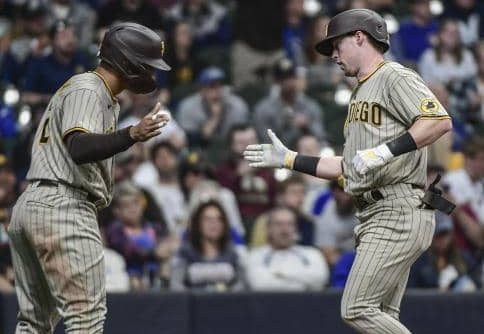 Milwaukee needs to find their offense heading into the 6/5 Padres at Brewers betting matchup. Craig Counsell’s squad has dropped consecutive games 7-0 and 4-0 as they shoot for a four game weekend split with San Diego on Sunday. Milwaukee won the series opener 5-4 as -105 favorites.

San Diego has found their way a bit after losing all three games in St. Louis and dropping game one in Milwaukee on Thursday. The Padres are in the dangerous ‘look ahead’ spot as they prepare to head back home for a7-game stand at Petco, starting with the 1st place Mets coming to town on Monday. Milwaukee is the -130 favorite for the series finale.

San Diego Getting the Pitching

Mike Clevinger (1-0, 3.21 ERA) hopes for a third straight dazzling start from the San Diego pitching staff when he takes the mound on Sunday. Joe Musgrove threw 8.0 IP of 1-hit ball on Friday while Mackenzie Gore had 10 K’s and 6.0 IP of 3 hit ball as he and three relievers combined for a second straight shutout.

Strong pitching has helped San Diego recover from what looked like it could be a horrendous road trip after getting swept in St. Louis and dropping the opener at American Family Field. Clevinger hasn’t started since May 17th due to a triceps strain, and he missed all of 2021 after Tommy John surgery so expect Bob Melvin to be cautious with the pitch count here.

Manny Machado has had a nice weekend going 4-13 with two doubles, a HR, 3 RBI, and 3 runs scored. Jake Cronenworth had a HR and a 2B to drive in three runs to fuel Saturday’s win. Jose Azocar is also 4-8 in the series.

The Brewers took two of three in San Diego on the weekend of May 23rd, but since then they’ve only managed 4-game series splits in St. Louis and at the Cubs. Milwaukee had hoped getting back home (where they are 15-8 on the year) would help them get a winning streak going but they’re in real danger of losing three out of four.

It’s no secret, Milwaukee needs some hitting in the 6/5 Padres at Brewers betting matchup. Kolten Wong had the team’s only hit on Friday and that didn’t come until the 8th inning and the team managed just 6 hits total on Saturday, striking out 10 times in six innings against the rookie Gore. The saving grace is that Clevinger hasn’t pitched in nearly three weeks for San Diego.

Eric Lauer (5-1, 2.49 ERA) goes for the Brewers in what oddsmakers expect to be a pitching matchup with a total of just 7.5. Lauer has allowed 2 ER or less in 7 of his last 8 starts, and also has a 0.90 ERA in three home starts this season.

Pretty solid value on Milwaukee here even though they haven’t hit the ball the last two games. Clevinger should be on a short leash and may not be sharp early in his first start in three weeks. At the same time Lauer has been nearly unhittable in three home starts.