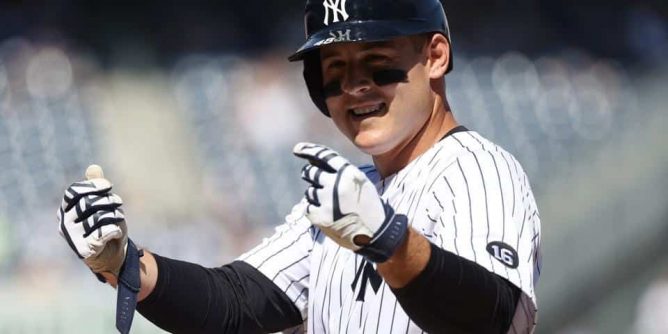 New York and Tampa Bay will meet up six times over the next two weekends, which should make things pretty interesting considering the Yankees lead in the AL East is down to six games. That stretch of games gets underway Friday night in the September 2nd Yankees at Rays betting preview where it’s Tampa Bay that is the -126 favorite.

The Yankees are hoping for better things in September after a 13-13 July and a 10-18 August have evaporated the big lead New York had for most of the season. The Rays are trending in the opposite direction going 18-9 last month but are 5-8 overall vs. the Yankees this year. A slight 56% of the public likes New York in the series opener.

It’s not like New York is in any danger of missing the postseason (99.9% to make playoffs) but for World Series hopes you definitely don’t want to limp down the stretch. Everybody keeps waiting for the Yankees to put their slump behind them and turn things around, but New York remains just 15-24 since the All-Star break which is barely ahead of Pittsburgh’s league worst 10-27 mark.

We might be seeing rock bottom for the Yankees right now, as they’ve lost four of their five and against the A’s and Angels. This supposedly potent offense has been held to 3 runs or less in 5 of the last 6 games, and no Yankees starter is hitting better than .250 over the past week. New York could also be without Anthony Rizzo the entire Rays series.

We will see if the New York offense gets back on track in the September 2nd Yankees at Rays matchup, but starter Domingo German (2-2, 3.19 ERA) shouldn’t expect it. The Yankees were 3-3 in German starts in August, and he’s coming off 7.2 IP of shutout ball in his last outing.

Rays With a Great Opportunity

Wile the Yankees fly from the West Coast reeling off disappointing losses to the A’s and Athletics, Tampa Bay has won 9 of their last 11. The Rays are coming off the road too, but in-state after a sweep in Miami.

Tampa Bay scored 3 ER over 4.2 IP against German on August 17th in what ended up being an 8-7 New York win in 10 innings. The Rays still took two of three in that series in the Bronx, redemption after a sweep at Yankee Stadium in mid-June. New York has taken 4 of 7 at the Trop this season.

The Rays gave up just 3 runs in the two games against the Marlins, a trend they hope continues when Jeffrey Springs (6-4, 2.76 ERA) takes the bump on Friday night. The Yankees have dropped six of their last seven against left-hand starters which helps Springs’ case here, but he also gave up 5 ER to the Red Sox in his last start.

New York had an off day on Thursday to rest from their trip to the West Coast but will it be enough in a trip to St. Petersburg where the Rays are 42-23 this year? The Yankees are in a rut, and red hot Tampa Bay should add to that misery Friday.