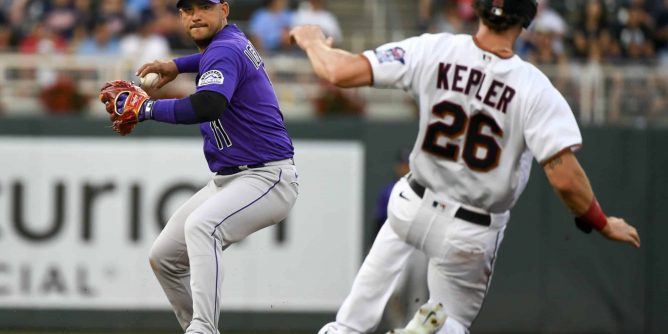 Much like the last couple seasons, Colorado is one of the worst road teams in baseball with a 12-21 record away from Coors Field. That didn’t stop them from getting a 1-0 win in Friday’s series opener as +133 underdogs, and now the visitors try to make it two in a row in the June 25th Rockies at Twins betting matchup.

Neither team was especially sharp in game one, but Minnesota managed just three hits as they lost for the fourth time in the last five games. Thursday’s game wasn’t exactly impressive either for the Twins offense, but at least they came away with a 1-0 win over the Guardians as -130 favorites. Oddsmakers like Minnesota in a bounce back here, setting them as -188 favorites with Colorado +158 on the underdog line.

Colorado was able to scratch across a run in the top of the 6th inning on a Charlie Blackmon ground out and it proved to be all the Rockies needed in the 1-0 win. It was a good win for a Colorado team that has been all over the place lately, sweeping San Diego (at Coors Field) but then losing all three to the Marlins in Miami this past week.

The Rockies did have 5 hits in the opener, and for once their pitching came through behind 7.2 IP from German Marquez. This is a team that suffered a 9-8 and a 7-4 loss during their trip to South Beach.  Colorado is still just 8-20 in their last 28 road games however.

Antonio Senzatela (3-3, 4.42 ERA) gets the start on Saturday trying to follow up the dazzling performance from Marquez in the opener. He’s had a 1ER or less outing in three of his last five starts, with two of those performances coming at Coors Field which is impresssive.

Twins Need Their Bats to Heat Up

So on Wednesday Minnesota belts out a dozen hits including four HRs as they plate 10 runs (still losing 10-11 to the Guardians). How do they follow that up? By getting 8 hits and just 2 runs in the last two games combined.

We don’t know which Minnesota offense will show up in the June 25th Rockies at Twins betting matchup. They’ve scored double digit runs twice in the past week, but have also been held to a run or less in three other games during that span. Only Carlos Correa has ever faced Colorado starter Senzatela, who has spent his entire career in the NL.

Dylan Bundy threw 6.0 IP of 1 ER ball on Friday but still took a hard luck loss. That’s a fate that Chris Archer (1-3, 3.44 ERA) will try to avoid in his start in game two. Archer has been pretty solid in allowing 4 total earned runs over his last four starts, but he also only gives you around 5.0 IP and with about a 75 pitch ceiling.

Colorado is a really bad road team but they snuck out an ugly won in the series opener. How do you trust this Minnesota offense though considering they’ve been held to 2 runs or less in 4 of the last 7, and have been held to a run or less 5 times in the last two weeks. Senzatela has been solid lately and the Rockies pull out what looks like another low scoring ballgame.