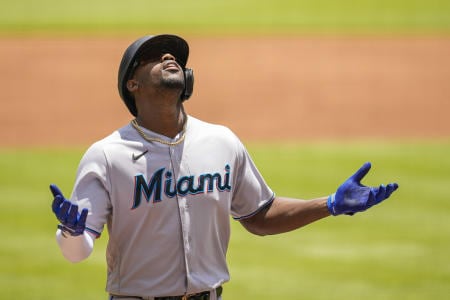 After another struggling road trip, Colorado is back at home for the May 30th Marlins at Rockies betting matchup. Bud Black’s squad was just 2-5 in visits to Pittsburgh and Washington and are now 7-15 in away games this year after being 26-54 in 2021. The Rockies are 14-11 at Coors Field however.

Miami visits Denver as losers of 7 of their last 9, and are just 1-4 on their current road swing. Pitching has been a bit of a concern for the Marlins with 5+ runs allowed in three of their last four – not a good trend when heading to the Rocky Mountains.

It is a bit cooler in Denver on Monday with a wind blowing in from center field, but the run total is still 10.5 and with Miami an interesting -150 favorite.  Colorado is +130 at home, but 71% of the public still like the Marlins.

Jorge Soler hit two HRs on Sunday, but the Marlins still fell 6-3 to the Braves as those two bombs accounted for all 3 of Miami’s runs. Soler hopes to keep the power stroke going over the next three games at hitter-friendly Coors Field. He needs to get some help though, with Jazz Chisholm going 0-5 on Sunday in his return from a hamstring injury.

The Marlins did get a 2-2 day on Sunday from Nic Fortes in his 2022 debut and Miguel Rojas is coming around with a .385 average over the past week. A series in Coors Field is a great opportunity for Miami’s #20 ranked scoring offense (4.07 runs/game) to pad their stats a bit.

Colorado was just 2-5 on their recent road swing, but Charlie Blackmon hit .375 the past week going 9-24 with a HR and 5 RBI. While Lopez is a good pitcher for Miami, Blackmon has feasted on him in his career going 4-6 (.667) while Randal Grichuk is 2-2 vs. the Marlins starter with both hits being solo HR.

The bad news is that’s about the extent of it, as the rest of the Rockies roster is 4 for 26 (.153) vs. Lopez. Brendan Rogers does have a 16-game hit streak going, Jose Iglesias 10, and five different Colorado batters have hit better than .300 over the past week – on the road. The May 30th Marlins at Rockies betting matchup should be fruitful – for the Colorado offense at least.

Pitching is a big question mark for the Rockies on Monday as Ryan Feltner (0-1, 5.40 ERA) makes just his 3rd start of the season and 5th in his career. Feltner pitched both games on the road this season, giving up 4 ER to the Phillies and 2ER to the Pirates – both in 5.0 IP of work and each a Rockies loss.

Lopez isn’t the same pitcher he was in April and Monday afternoon marks his first ever trip to Coors Field. That alone should give the Rockies value as +130 home underdogs, but just good for measure a play on the ‘over’ 10.5 should be made because we don’t know what to expect from Feltner on the mound for Colorado either.