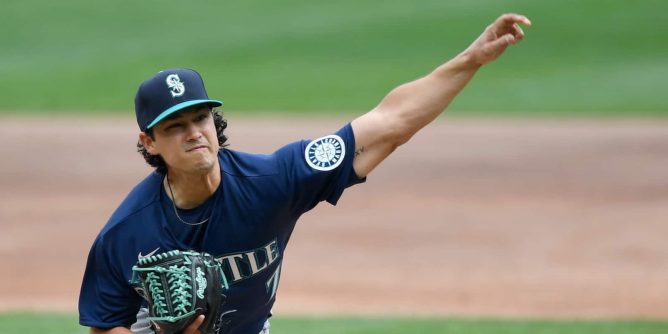 The visit to Boston was not kind to Seattle as they return home for the May 23rd Athletics at Mariners betting matchup. The Mariners lost all four games at Fenway Park and were just 3-7 on their recently wrapped up road trip. Seattle is now 8-18 on the road, but much better with a 9-7 record at T-Mobile Park.

Oakland has been good at stealing a win in their last three series, getting one each vs. the Angels, Twins, and another visit with Los Angeles. Overall though losses are more abundant than victories as the A’s are 3-7 over that span. The A’s may snag one the next three days which gives them some value at +150, but the Mariners look like the early lean even with a pricy -169 favorite.

The A’s lost 4-1 in their series finale against the Angels on Sunday making it half of their last 8 games in which they’ve been held to just 1 run. LAA starter Patrick Sandoval took a 2-hit shutout into the 8th in that game and Oakland played like an offense that ranks last in BA (.205) and OPS (30) and 29th in runs/game (3.26) and HR (25).

Oakland likely won’t fare much better in the May 23rd Athletics at Mariners matchup having to go up against Seattle’s red hot Marco Gonzales. The left-hander has allowed 2 ER or less in 7 of his 8 starts this season and Oakland has hit just .215 vs. Southpaws this season and .206 (26-120) as a team vs. Gonzales.

The A’s also counter with a left-hander on Monday night as Zach Logue (2-2, 2.04 ERA) hopes to continue a strong rookie campaign. Logue has made three starts following a bullpen appearance in his debut, giving up 4 ER over 16.1 IP.

Seattle Back at Home

There is the possibility that the Mariners come out a bit flat in the opener as they make the cross-country trek after road trips to face the Mets, Blue Jays, and Red Sox. Even with Boston’s struggles this year they are a team with a ton of talent as is Toronto – and New York is a first place team so that’s quite a gauntlet.

The Mariners do get a bit of a break with Oakland coming to town on Monday night, a team they have won 12 straight against and were 15-4 vs. in 2021. Seattle gave up 33 runs in that four game sweep at the hands of Boston, but that should get shored up a bit with Gonzales on the hill.

Seattle is a bit pricy at -169 making the cross country trek after a long road trip, but that’s still value against the A’s. Oakland has dropped their last six at T-Mobile Park and have lost 12 straight overall to the Mariners. The Athletics’ young pitcher Logue has had a good start to his career and this one could very well stay under the microscopic “7” run total, but the real value has to be on the M’s.