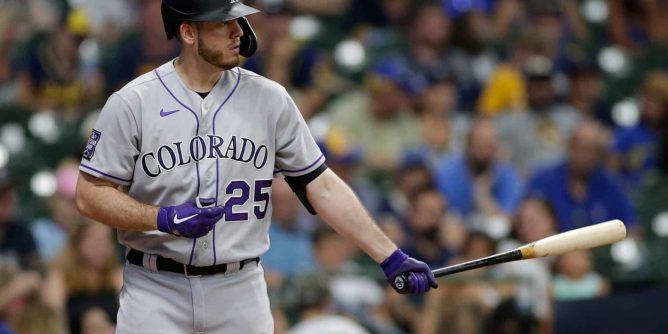 A couple of NL West rivals meet up in the May 16th Giants at Rockies betting matchup. This is not a series that has been kind to Colorado in recent years, losers of 10 straight and 20 of the last 26 overall. That includes a three game San Francisco sweep in the bay last week, 8-5, 9-2, and 7-1. Will we see three more high scoring affairs at Coors Field?

The Giants are a -150 favorite in Monday’s series opener which doesn’t seem like a horrible price riding a 10-game win streak in the head to head matchups. 74% of public bettors agree though which always raises a bit of a red flag. San Francisco has lost two in a row including 15-6 in St. Louis on Sunday Night Baseball, but can Colorado +130 be played?

Giants in a Quick Slump

San Francisco had rattled off a season high six wins in a row, but they find themselves staring down a two game losing streak after falling 4-0 and 15-6 in St. Louis the last two games. Colorado has been good for what ails the Giants lately though, as they averaged 8 runs over a three game sweep last week and that wasn’t even at Coors Field.

The run total for the May 16th Giants at Rockies betting matchup is 12, but there could be a ton of action at the plate on Monday night at Coors Field. Not only did the Giants average 8 runs/game against Colorado pitching last week, the Rockies come into this game putting up 27 runs in their three game weekend series at home against Kansas City – and going 1-2 in that span.

Colorado is the best hitting team against left-handers this year, but Kansas City Southpaw Daniel Lynch held them to 3 hits and 0 ER over 5.1 IP on Sunday. The Rockies bounced back with a 7-run frame in the bottom of the 7th but still suffered an 8-7 loss as -137 favorites. Couple that with the struggles against the Wood last week and maybe Colorado’s success against lefties is just because of some stat padding at Coors Field.

Senzatela will try to have a better outing than he did last week against San Francisco. The right-hander has an impressive 2.37 ERA in four starts at Coors Field this season while Wood was 0-0 with a commendable 4.00 ERA in two starts in Colorado last year. Maybe this one won’t be the high scoring affair it’s expected to be.

74% of the public is on San Francisco riding a 10-game win streak over the Rockies. That’s a red flag for sure and at the price of -160 when the three games last week were -238, -208, and -204. That puts this a play on either Colorado or the total – but why not both. The Giants come in a little groggy from Sunday night baseball and with warm weather and wind blowing out the runs come a plenty.