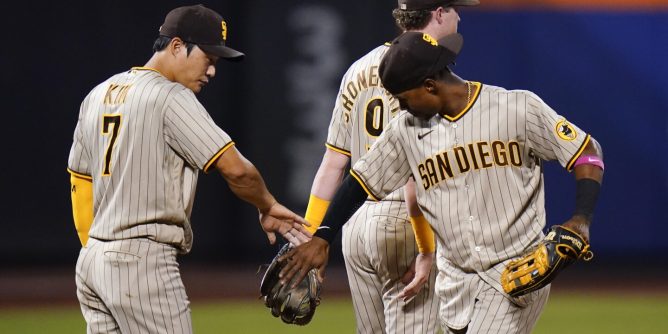 The San Diego Padres (55-45, 25-21 home) host the Minnesota Twins (52-46, 25-24 away) in the series opener of a three-game set between the two interleague foes. This weekend’s series will be the only time these two teams face each other this season.

Friday’s first pitch is scheduled for 9:40 p.m. EST at Petco Park in San Diego, California. The Padres open as a slight favorite at -120, and the over-under total is 7.5 runs.

What to Know – Minnesota Twins

Minnesota continues its road swing this weekend on the West Coast. The Twins play their first seven games away from home to start the second half of the season. Minnesota holds a two-game advantage over the Cleveland Indians in the American League Central.

Right-hander Joe Ryan (7-3, 2.89 ERA. 1.05 WHIP) is the expected starter for the Twins. Ryan’s been solid in the rotation this season for Minnesota and hasn’t allowed more than two earned runs in start over his last four outings. The California-native has 81.0 innings of work on the hill, allowing 26 earned runs on 62 hits and 23 walks with 73 strikeouts.

The Twins’ offense has a handful of players that aid in its production. Jorge Polanco leads the team with 49 RBIs while Byron Buxton is the clubhouse leader with 24 home runs. Luis Arraez is batting .333 and has scored 54 runs.

Minnesota is seventh in the majors hitting .252 as a team and scoring 4.6 runs per game. The Twins pitching staff is 18th in the league sporting a 3.99 team earned run average.

The Padres are back home for the first time since the All-Star break after a pair of series out east. San Diego has dropped three of its last four contests and remains well back of the Los Angeles Dodgers in the NL West.

The lefty Blake Snell (2-5, 4.75 ERA, 1.45 WHIP) takes the mound for the hosts after posting his best outing of the season last week. Snell held the Mets scoreless over five innings to pick up his second victory of the year. Through 55.0 innings of work, Snell has surrendered 29 runs on 47 hits and 33 walks while striking out 71 batters.

Manny Machado has been the team leader offensively with Frenando Tatis Jr. injured. The slugging third baseman leads the Friars with 16 home runs and 54 RBIs. Jake Cronenworth has driven in 49 and Luke Voit has 44 RBIs.

On offense, the Padres average 4.3 runs per contest and sit 18th in the MLB hitting .240 as a team. San Diego’s pitching staff ranks 8th in the majors thanks to a 3.78 team ERA.

These two teams meet for a rare series beginning Friday night in SoCal with both having playoff aspirations. Snell has been a shell of his former self after injuries have plagued his career, but the southpaw looked solid in his second-half debut against the Mets. We like Padres to open up with a victory backed by another strong outing by Snell.