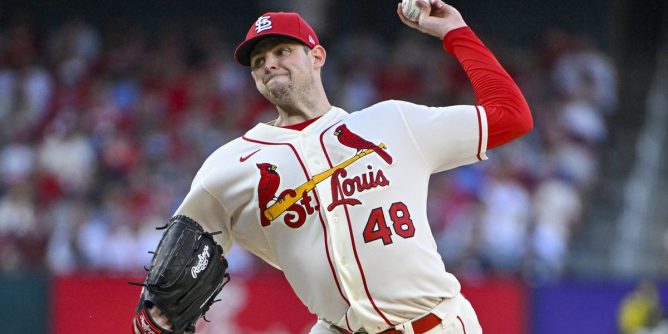 The St. Louis Cardinals (83-58, 47-24 home) host the Milwaukee Brewers (75-66, 36-39 away) in a critical two-game series between the top teams in the National League Central. St. Louis holds an 8-7 head-to-head record against their divisional rival this season.

Tuesday’s first pitch is at 7:45 p.m. EST inside Busch Stadium in St. Louis, Missouri. The Cardinals are the betting favorites at -210, and the over/under total is eight runs.

What to Know – Milwaukee Brewers

Milwaukee has little time to waste if they want to make a run at the divisional title with less than a month remaining in the regular season. The Brewers have four of its last five contests but sit eight games in the NL Central.

The probable starter for the visitors is right-hander Matt Bush (2-2, 3.23 ERA, 1.00 WHIP). The 36-year-old veteran has been used out of the bullpen since joining the Brewers roster but will make his first start on Tuesday night. Between Milwaukee and the Texas Rangers, Bush has pitched 53.0 innings, allowing 19 earned runs on 38 hits, and 15 walks, while striking out 69 batters.

The hitting of Rowdy Tellez and Willy Adames has powered the Brewers’ offense this year. Adames has driven in 82 runs, while Tellez is right behind him with 80. The two hitters have combined to smack 58 home runs.

Milwaukee scores 4.5 runs per contest behind an offense that is 22nd in the majors, hitting .234 as a team. The Brewers pitching staff ranks 15th in the MLB with a 3.91 team earned run average.

St. Louis can further separate itself from the Brewers with a pair of wins against them this week. The Cardinals took two of three from Pittsburgh over the weekend after splitting a four-game set with the Washington Nationals during the week.

Left-hander Jordan Montgomery (8-3, 3.08 ERA, 1.04 WHIP) will toe the rubber for the hosts. Montgomery has yet to lose since being acquired from the Yankees, sporting a 5-0 record over seven starts in a Cardinal uniform. Over 158.0 innings of work, Montgomery has surrendered 54 earned runs on 154 hits and 31 walks with 135 strikeouts.

Paul Goldschmidt hasn’t let off the gas at the dish, swatting 35 home runs and driving in 109 RBIs with a .325 batting average. Nolan Arenado is right behind Goldschmidt with 28 home runs and 93 home runs of his own. Albert Pujols sits just three home runs away from becoming the fourth player to hit 700 career dingers.

The Cardinals rank seventh in the league batting .257 as a team and averaging 4.9 runs per game. The pitching staff for St. Louis is tenth in the majors behind a 3.85 team ERA.

The regular season is quickly coming to an end, and the Brewers need to win and win now if they want a shot at the divisional title. It might be too little, too late for Milwaukee, as the Cardinals have been on fire during the second half. Milwaukee will use Tuesday as a bullpen game, and the Cardinals’ offense will take advantage.